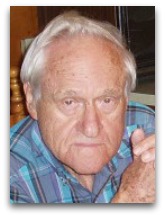 In hmolscience, Martin Goldstein (1919-) is an American physical chemist noted, in for his 1993 discussion on the "entropy of a mouse", wherein he discusses the difficulties involved in calculating he free energy of formation of a mouse.

Overview
In 1993, Goldstein, in his The Refrigerator and the Universe: Understanding the Laws of Energy, co-written with American epidemiologist Inge Goldstein, in discussed the difficulties involved in calculating the entropy of a mouse, via the standard procedures used to calculate the entropies of simple molecules, are discussed. The following is a condensed excerpt of that section: [1]

“To apply thermodynamics to the problem of how life got started, we must ask what net energy and entropy changes would have been if simple chemical substances, present when the earth was young, were converted into living matter [as in the formation of a mouse] … to answer this question [for each process], we must determine the energies and entropies of everything in the initial state and final state.”

Education
Goldstein graduated with a BS from City College New York in 1940 and a PhD from Columbia College in 1950. In 1993, Goldstein was a retired professor of chemistry at Yeshiva University. The idea for the book began to seed when Goldstein took a correspondent course in thermodynamics while serving in the U.S. Army.