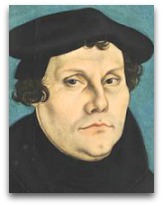 95 Theses
On 31 Oct 1517, Luther famously penned 95 theses, or Catholic church "abuses" that needed to cease, which he famously “nailed” to the door of a chapel in Wittenberg, Germany, an act that became a catalyst for the Protestant Reformation; Jack Repcheck (2007) summarizes this act as follows: [3]

“Each thesis was an abuse that Luther demanded must be discontinued) and it was hung on the main door of the massive Castle Church of Wittenberg. The specific event that drove Luther into action was the demand from Rome that all Christians contribute to the rebuilding of St. Peter's Basilica in Rome. To raise funds, Pope Leo X ordered the Dominican friars to fan out throughout Christendom and collect money. The specific tool that they used to separate the precious coins from the impoverished peasants and laborers was the selling of indulgences. An indulgence was a piece of parchment, the purchase of which subtracted a certain number of years from the amount of time a person would spend in Purgatory before entering the kingdom of heaven. One could also buy an indulgence to reduce the Purgatory sentence for a deceased relative or for one who was still alive. Most of Luther's theses concerned the indulgences. Though the posting of the ninety-five theses was later recognized as the spark that lit the fire, this was hardly Luther's intention.”

This act was the official start of the Protestant Reformation or century-plus long “reformation” (Ѻ), a wave of religious reform that ended the Thirty Years War (1618-1648); which, to note, gave way to a time of peace that produced Otto Guericke, his vacuum experiments, and the Magdeburg hemispheres; which resulted in the eventual science of thermodynamics; which is the foundation of the newly synthesizing science of human chemical thermodynamics, the subject that explains the science behind the thermal term "spark that lit the fire", in the social revolution context, in an explicit atheism purview.

“Erasmus, you foster in your heart a Lucian, or some other pig from Epicurus’ sty who, having no belief in god himself, secretly ridicules all who have a belief and confess it.”

Copernicus
In Jun 1539, Luther, during on of his dinner seminars, just after Georg Rheticus had arrived in Frombork, said the following: [3]

“There is mention of a certain new astrologer who wanted to prove that the earth moves and not the sky, the sun, and the moon. This would be as if somebody were riding on a cart or in a ship and imagined that he was standing still while the earth and the trees were moving.”

This is hilarious to the last. It brings to mind DMR Sekhar’s religion and science reconciliation-attempting will-based self-motion theory mindset reaction to Libb Thims’ external force (or exchange force) motion theory; for example:

“I can't stop but laugh at myself when I think that I am not alive or I am not moving myself.”

“Whoever wants to be clever must agree with nothing that others esteem. I believe the holy scriptures, for Joshua commanded the sun to stand still and not the earth.”

In mid Feb 1540, Philipp Melanchthon, Luther's intellectual buddy, was one of two people, the other being Andreas Osiander, who was sent a preliminary copy of Georg Rheticus' First Report on Nicolaus Copernicus' rumored-to-exist heliocentric model;

“Copernicus is a fool wants to turn the whole art of astronomy upside down.”

Montaigne
Luther’s reformation movement was one of the sparks, supposedly, prompted Michel Montaigne (1533-1592), in 1568, into the atheism vs theism apologetics arena. (Ѻ)
-
Quotes | By
The following are noted quotes:

“Reason is the enemy of faith.”

“Peace if possible, but truth at any rate.”

“No one need think that the world can be ruled without blood. The civil sword shall and must be red and bloody.”

“Justice is a temporary thing that must at last come to an end; but the conscience is eternal and will never die.”

“Every man must do two things alone; he must do his own believing and his own dying.”

“I cannot and will not recant anything, for to go against conscience is neither right nor safe. Here I stand, I can do no other, so help me God. Amen.”

“The multitude of books is a great evil. There is no limit to this fever for writing.”

“Our Lord has written the promise of resurrection, not in books alone, but in every leaf in springtime.”