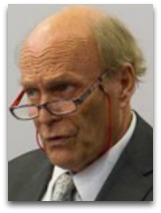 In existographies, Martin Swales (1940-) (CR:3) is a Germanic literature scholar noted, in human chemistry, for []

Overview
In 2002, Swales, in his Reading Goethe: a Critical Introduction to the Literary Work, co-written with Erika Swales, college lecturer and fellow of King’s College, Cambridge, cogently summarized German polyintellect Johann Goethe's 1809 physical chemistry novella Elective Affinities as being a treatise on the following deep query: [1]

“Are men and women subject to the same laws of material reality as are the chemical substances?”

They correctly define the science of human chemistry, in more detail, as a precipitate of Goethe's Elective Affinities, as follows:

“The Hauptmann [Captain] is invited to join Eduard and Ottilie; and it is the resulting threesome that one evening discusses the notion of ‘Wahlverwandtschaften’ (elective affinities), processes of bonding and rebonding in chemistry. At issue is the possibility that a particular compound can be fractured by the appearance of a third substance which then bonds with one of the previously conjoined substances—almost as though some kind of choice were being exercised. At one level, the discussion amongst the three friends genuinely does concern recently discovered chemical processes. At another level, the characters ceaselessly make metaphorical links between the behavior of chemical substances on the one hand and the chemistry of human attraction on the other. And, as soon as one formulated the matter in this way, in terms of ‘human chemistry’, one asks oneself whether this, too, is a literal or metaphorical statement. Are men and women subject to the same laws of material reality in the same way as chemical substances are? If so, what is the force of ‘Sitten und Gesetze’ [customs and laws] in the human sphere?”

The German term "sitten and gesetze", to note, translate as "customs and laws"; meaning that the authors are asking, in modern times, what is the force, of the four fundamental forces in physics, which to clarify is the electromagnetic force, of the customs and laws in the human sphere?

They also discuss what the refer to as the coming together of the "E-C-H-O constellation". The following is noted quote from the book:

“Throughout their discussion, the characters [of Elective Affinities] traverse the metaphorical minefield of their topic.”

which brings to mind the "danger" aspect often associated with the novel.

Education
Swales was professor of German at University College London from 1976 to 2003.