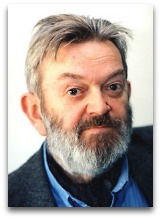 In existographies, Martinus Veltman (1931-) (CR:7) is Danish-born American theoretical physicist noted for his 1999 win of the Nobel prize for his particle physics work, with Gerardus 't Hooft, on the electroweak force, and for his 2003 Facts and Mysteries in Elementary Particle Physics.

“We are living in a totally ridiculous world. We have all kinds of things from horoscopes to Zen Buddhism to faith healers to religions to what have you. The whole world around us is full of nonsense, baloney, big speak and what have you. The fact that I'm busy in science has little or nothing to do with religion. In fact, I protect myself, I don't want to have to do with religion. Because once I start with that, I don't know where it will end. But probably I will be burned or shot or something in the end. I don't want anything to do with it. I talk about things I can observe and other things I can predict and for the rest you can have it.”