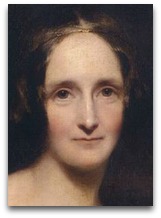 In existographies, Mary Shelley (1797-1851) (IQ:175|#294) (EPD:0M) (GFG:6) (CR:47) was an English philosopher and novelist noted for her 1818 fictional character “Vicktor Frankenstein”, who discovers the “principle of life” (see: life principle), and thereby reanimates, revives, or brings to life a dead corpse with electricity, i.e. creates laboratory produced life; and for her 1839 discussions of the atheist-based "Church of Elective Affinities", which she alluded to have married her husband Percy Shelley in.

Victor Frankenstein
In 1818, Shelley, in her Frankenstein: the Modern Prometheus, introduced her now famous character "Victor Frankenstein", aka "Dr. Frankenstein", semi-ranked as a greatest fictional genius ever, the character of which is said to have been based partly on her knowledge Paracelsus and the recently published 1791 dead frog leg twitching electrical experiments of Italian physician Luigi Galvani. This model is frequently cited, e.g. Alfred Ubbelohde (1954), amid physical science based discussions of what constitutes "life". [1]

Intellectual background
Shelley, a semi-ranked smartest woman ever, was the daughter of women's rights activist Mary Wollstonecraft, whose influences were: Jean Rousseau, Thomas Paine, and Voltaire, and anarchist philosopher William Godwin; she eloped with the poet and Percy Shelley; she wrote the novel Frankenstein as part of a bet with Shelley and his friend George, Lord Byron; an About.com top 100 (#49) Women of History (Ѻ)

Quotes | By
The following are noted and or related quotes:

“When I returned home my [Victor Frankenstein] first care was to procure the whole works of this author [Cornelius Agrippa] (Cattell 1000:c.660) (Ѻ), and afterwards of Paracelsus and Albertus Magnus. I read and studied the wild fancies of these writers with delight; they appeared to me treasures known to few besides myself. I have described myself as always having been imbued with a fervent longing to penetrate the secrets of nature. In spite of the intense labor and wonderful discoveries of modern philosophers, I always came from my studies discontented and unsatisfied. Sir Isaac Newton is said to have avowed that he felt like a child picking up shells beside the great and unexplored ocean of truth. Those of his successors in each branch of natural philosophy with whom I was acquainted appeared even to my boy's apprehensions as tyros engaged in the same pursuit.”

“Beware; I am fearless and therefore powerful.”

“Many and long were the conversations Lord Byron and [Percy] Shelley, to which I was a devout, but nearly silent listener. During one of these various philosophical doctrines were discussed, and, among others, the nature of the principle of life and whether there as any probability of it ever being discovered and communicated. [Perhaps a corpse would be reanimated? Galvanism had given a token of such things].”