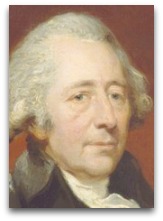 In existographies, Matthew Boulton (1728-1809) (CR:7) was an English metal products manufacturer, noted for []

Overview
In 1762, Boulton, after inheriting a large sum of money upon his father’s death (cessation), opened the “Soho works” manufacturing plant, which made clocks and timepieces. The mill, at this time, was operated by horses, being that water-power (running rivers) were lacking at Soho. Being that the power of horse was irregular and sometimes failed, he soon began to contemplate the possible application of the steam engine to his mill.

“The enormous expense of the horsepower put me upon thinking of turning the mill by fire.”

He continued that he had been recently making fruitless experiments on the subject. On Feb 22, 1766, Boulton wrote Benjamin Franklin about this and sent him a model he had made. [2] Soon thereafter, English inventor John Roebuck, a correspondent of Boulton’s, told him of a young Scottish inventor named James Watt who had been making recent progress with model steam engines. Boulton then invited Watt to visit him at Soho, which he did on a return from a visit to London.

In 1775, Boulton and Watt formally entered into partnership, and it was mainly through the energy and self-sacrifice of Boulton, who devoted all the capital he had or could borrow to the enterprise, that the steam engine was at length made a commercial success; and for the next eleven years the Soho Foundry they made Watt's steam-engines for colliery owners to pump water out of mines, the Boulton & Watt engine being four times more powerful than Thomas Newcomen's original design.

In c.1770s, James Watt obtained funding from John Roebuck (1718-1794), in return for two-thirds interest, to get his engine into production; Roebuck, at some point, however, fell into hard times, and withdrew, after which Boulton stepped into take over the financing.

Boulton was the one, supposedly, that badgered Watt into turning the reciprocating motion engine, solely used for pumping mines, into a rotative motion engine, via the sun and planet gear, which could thus be used in factories in cities.

In 1783, Watt and Boulton standardized the figure of one “horsepower” at 33,000 foot-pounds per minute, in order to classify their engines for sale, and by 1809, this was generally accepted as equivalent of 1 horsepower, as it is today.

Other
In 1782, Boulton introduced Watt to John Southern, then aged 24, an aspiring musician of sorts, who thereafter became Watt’s assistant and right-hand man, becoming partner in 1810. (Ѻ)

Quotes | By
The following are quotes by Boulton:

“The people of London, Manchester, and Birmingham are steam mill mad.”