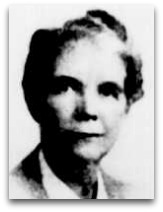 In existographies, Maud Merrill (1888-1978) was an American intelligence psychologist noted for []

Education
Merrill completed his AB in 1911 at Oberlin College and her AM in 1920 and PhD in 1923 both at Stanford University.

“One rater (Merrill) has scored on the basis of the record of Goethe’s youth an IQ of 225. Goethe’s true IQ may in the history of mankind have been equaled in a few instances; one may well wonder whether it has ever been exceeded?”