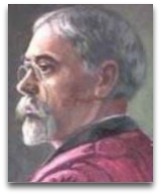 In human thermodynamics, Maurice Hauriou (1856-1929) (SN:15) (CR=24), in full: Jean Claude Eugene Maurice Hauriou (Christopher Gray, 2010) or Maurice Jean Claude Eugene Hauriou (Ѻ), was a French social-philosopher and law professor noted for his 1896 Traditional Social Science, wherein he discusses concepts such Goethe and the romantic view, social chemical potential, society as "social matter", etc., and for his 1899 book Lessons on Social Movement, in which he attempts outline a what he calls a needed "new science" so to explain human movements in society in terms of thermodynamics, discussing concepts such as entropy, mechanism, dissipation, and reaction.

Overview
The following is a representative quote by Hauriou: [1]

“If we understand that the connections we have made are not just not been pointless, but rather are the curious road to the explanation of social movement, characterized by gross business men or events, be transformed into its representation mental aspects also curious to see the representative energies, in turn, is converted back into social movement organizations and institutions. These transformations are comparable to those of motion into heat and heat into motion [mechanical equivalent of heat]. We have applied in the social principle of the impossibility of perpetual motion, the principle of Mayer became representative of the equivalence principles of heat engines, including that of the Carnot maximum efficiency. We have not yet exhausted the analogies that thermodynamics should furnish. It remains to use the principle of Clausius or the increase of entropy, the principle is formulated thus: ‘In the transformation of a closed system, there is a quantity that is constantly increasing, entropy, and when the largest possible system value occurs, the transformations stop.’ This principle will provide extraordinary light on the conduct and the creation of a static society, commonly seen in the creation of situations of state. We see that this is what working energies representative.”

The density and correctness of this quote indicates that this book of Hauriou fits alongside of those of Mehdi Bazargan and Leon Winiarski as those whose human thermodynamics book are in great need of English translation. Hauriou’s Lessons is said to be one of the earliest attempts to apply the model of thermodynamics to social science. [5]

A noted Hauriou scholar is Canadian law philosopher Christopher Gray, who did the first English translation of his 1896 Tradition in Social Science.

Education
Hauriou completed baccalaureates in science and arts at Angouleme. He completed a law degree at the University of Bordeaux, getting his license in 1876; doctorate in 1879; and aggregation, the final research degree in 1883. Thereafter, he took charge of courses in the history of law at Toulouse, and continued to do work in a wide variety of fields. He also gives credit in his education to vigorous daily discussions at Café Capitole, with his philosophical colleagues: Frederic Rauh, Jean Jaures, Georges Dumesnil, and Viktor Delbos. In 1888, Hauriou was appointed chair of the administrative law department at Toulouse. His first of sociology publications seems to be the 1896 book The Traditional Social Science. [3] In the writing of his Lessons on Social Movement, completed in 1898, Hauriou states that he undertook a program of self-study of the thermodynamics work of Henri Poincare, likely Poincare's 1892 Thermodynamics textbook. [4] Hauriou became dean of the faculty of law at Toulouse in 1906; retiring from that position in 1926.

Quotes | Related
The following are related quotes on Hauriou:

“However much Hauriou was revered as a sociologist and philosopher in his day and remains influential in Latin America and Europe, he is largely unknown in the English-speaking world.”

“It [becomes] necessary to study the thermodynamics. The increase in entropy [is] a sign that it exists in the ‘conduct’ of the universe, conduct that is carried out by application of the organic representative and it is manifested by the creation of static and the increase of law, it aims to free items. I ventured to see in thermodynamics ‘the science of behavior of physical movements’ and I made for the moral sciences or sciences of the conduct of social movements.”