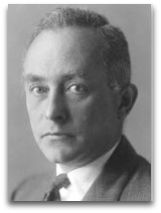 In existographies, Max Born (1882-1970) (RGM:494|1,310+) (CR:24) was a German physicist noted for having introduced the thermodynamic square method of deriving the Maxwell relations in his late 1920s University of Gottingen lectures on thermodynamics. [1]

Thermodynamics
Born’s reading of Willard Gibbs' 1902 The Elementary Principles of Statistical Mechanics, as a young student at Cambridge University, is what convinced Born to become a physicist. [2] Born was also a friend with Constantin Caratheodory, the first to work in the mathematical proofs of thermodynamic.

Born, according to Paul Samuelson, however, supposedly, had a repugnance against basing thermodynamics on axioms crouched in terms of the impossibility of perpetual motion machines of various kinds. (Ѻ)

Quantum mechanics
Born, in physics, is noted for having built on Werner Heisenberg’s initial work around 1925, so to apply Niels Borh’s theory of the atom to suit more complicated atoms and molecules, beyond hydrogen, and he also proved that Erwin Schrödinger's wave equation could be interpreted as giving statistical (rather than exact) predictions of variables, for which he won the 1954 Nobel Prize in physics. (Ѻ)
Religion
Born seems to have free-wielding employer of god talk; for example:

“If god has made the world a perfect mechanism, He has at least conceded so much to our imperfect intellects that in order to predict little parts of it, we need not solve innumerable differential equations, but can use dice with fair success.”