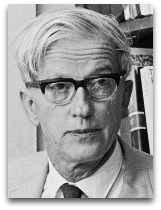 Other
In 1963, Eugene Stanley completed biological physics work under Delbruck.

Quotes | On
The following are quotes on Delbruck:

“In a fascinating interchange, Frederick Donnan and Edward Guggenheim argue against an assertion by the eminent physicist James Jeans, that life could yield a net increase in organization and therefore a decrease in entropy (Donnen 1934; Guggenheim 1934; Jeans 1934; called to my attention by Max Delbruck). In 1933, Jeans had written that ‘in fact, it would seem reasonable to define life as being characterized by a capacity for evading this law. It probably cannot evade the law of atomic physics, which are believed to apply as much to the atoms of a brain as to the atoms of a brick, but it seems able to evade the statistical laws of probability. The higher the type of life, the greater is its capacity for evasion’ (1933).”