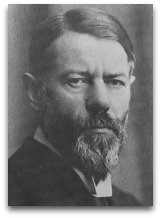 In existographies, Max Weber (1864-1920) (IQ:170|#323) [RGM:133|1,500+] (Gottlieb 1000:806) (HCR:8) (CR:61) was a German sociologist, Goethean philosopher, oft cited last person to know everything and considered the "last universal genius of social science", noted for his so-called Weberian elective affinities theory, namely the use of Goethe’s human elective affinity theories in the development of his social theories. [1]

Education
In 1878, Weber, age 14, began reading Goethe. [2] Weber, in fact, read Elective Affinities in the classroom as a young student, hiding it behind his textbook. [3] His first published use of the term “elective affinities” occurs in 1904. (Ѻ)

Overview
In his 1905 The Protestant Ethic and the Spirit of Capitalism, Weber proposed that there is an elective affinity between important ideological, economic, and social interests, conditions, forces, and processes constituting the development of rational capitalism. [5]

In a general sense, Weber, supposedly, was one of the first to promote linkages between the natural sciences, human behavior, economics, and cultural development in his 1920 book The Theory of Social and Economic Organization. [4]

Scottish sociologist Andrew McKinnon in 2010 claims to have done the first systematic analysis of Weber's usage of "elective affinity" in his work and theories. [6]

Translation issues
English translators of Weber’s work, to note, more often than not, have tended to render the German term “Wahlverwandtschaft”, meaning elective affinity, as either "correlation, relationship, or bond", thus unintentionally acting to distance or cut off Weber’s original chemical meaning from his work. [3]

Quotes | On
The following are quotes on Weber:

“Weber seems to me very much a man of a particular time. A man of whom it has been said (as it has of others) that he was the last person to know everything of importance that was to be known. A nonsensical idea, of course, but one which point to the extraordinary breadth of his interests in sociology, religion, economics, politics, history, music, and much else besides.”

Quotes | By
The following are quotes by Weber:

“Power is the probability of realizing one’s goals, even against the resistance of others.”