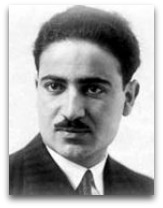 In existographies, Mehdi Bazargan (1907-1995) (SN:14) (CR:80) was an Iranian mechanical engineer, thermodynamicist, and 75th prime minister of Iran (1979), known, in human thermodynamics, for his 1956 treatise Thermodynamics of Humans, written during a five-month prison spell (see: genius hiatus effect), for political opposition, in which he attempted to explain the work ethic of the individual in the context of the Islamic teachings and the view that systems, physical or social, evolve towards equilibrium as quantified by a minimum of free energy. [1]

Overview
The following is a 2011 synopsis of Bazargan’s human thermodynamics theory, from the article “Muslim Scholars on Dialogue of Modern Science”, by Malaysian scholars Nurdeng Deuraseh, Termizi Abu Talib, and Husni M. Harun, generally based on the 2004 work of Mazyar Lotfalian: [16]

“The Iranian engineer and post-revolutionary Prime Minister, Mehdi Bazargan proposes the theory of thermodynamics. This is to find out the relationship between faith and knowledge and the role of morality in everyday life, which is an attempt to combine Western techno-science with local culture. Bazargan’s usage of the theory of thermodynamics is not metaphorical. His arguments are followed by direct application of concepts and formula. What he achieves is quite creative: faith and knowledge become intertwined but disjointed....The effect of this disjointedness is that the individual becomes responsible for acting morally, as if he or she is performing the act of god. Second, as argued by Bazargan using the theory of thermodynamics, faith is self-reflecting: it changes through time and adjust to renew changes in life. Faith also dies if there is no effort by the subject to revive it.”

Bazaran's first published views on human thermodynamics are said to be found in a circa 1943 article entitled “The Thermodynamics of Love”, written soon after his return to Iran, likely from his stay in France (circa 1942). [15] In 1946 he had written the a chapter on physiological thermodynamics of human labor and in the context of will power in his Labor in Islam, attempting to explain human labor thermodynamically. [10] Thermodynamics, subsequently, served as the foundation of Bazargan's view as to how a society should be run, as being based on the same laws that run the universe. As stated by biographer Saeed Barzin, from his 1992 PhD dissertation on the political biography of Bazargan: [9]

“Mention should be made of Bazargan’s field of study; thermodynamics, which constitutes a fundamental part of all the physical sciences and which (particularly its concept of equilibrium) was to be a source of inspirations for Bazargan’s subsequent reflections on social relations.”

In short, into the 1950s and 1960s, Bazargan worked to create a theory or science of a "thermodynamics of humanity" that would explain the teachings of Islam from a scientific point of view. [8] Bazargan’s 1969 Thermodynamics in Human Condition (may be referring to: Termodynamik-e Ensan) addressed the relation between individual morality and social movement. [7] Bazargan’s essential goal was to confirm the truth of Islam, as taught in the Koran, on the basis of science. Specifically, according to 2004 author Seyed Taqavi, “the most important feature of Bazargan’s thought is his utilization of empirical sciences, and particularly thermodynamics, which was his own specialism, in his approach to Islam. No other Iranian thinker has drawn upon new sciences in the study of Islam as widely as he did.” [8]

Bazargan wrote his famous 1956 treatise Eshq va Parastesh ya Thermodynamic-e Ensan (Thermodynamics of Humans) while in prison for his political views, a precipitate of the 1953 Iranian coup and its subsequent political restrictions. The book was first published in 1957, according to private documents in possession of Bazargan's biographer Saeed Barzin. [9] Based on several reviews, the books seems to be a thermodynamics of society, blended with Darwinism, appended with footnotes on how certain Koranic verses might corroborate with certain scientific passages. The book is described as “a juxtaposition of scientific ideas and concepts of social relations.” [11] Of similarity, American mathematician William Sidis wrote his 1920 treatise The Animate and the Inanimate while imprisoned in an asylum for a year, after arrest and 1.5-year jail for political protesting.

“This section intends to examine the inherent attributes of work and the effects it has upon the internal and external structures and transformations of the human individual. If such a phrase is scientifically permissible, the subject will be treated in the light of ‘physiological thermodynamics’.”

Labor
In theorizing on the work ethics of the Iranian, Bazargan applied mechanics to the movement of the human body, based on thermodynamics. He mixed this together with Islamic teachings and the views of Karl Marx. These views are, supposedly, found in his chapter two “A Physiological Analysis of Human Thermodynamics” to his 1946 Labor in Islam. [10] Bazargan was in prison at least two times, during which period 1953-60, he was said to have been “engaged in elaborating on themes on the nature of evolution and social laws.” He wanted to prove that social developments and social relations are governed by laws, in that history and society are governed by processes which are rational and logical. It must thus be one’s objective to discover these laws, such that when failure to act according to these laws, as Bazargan states, social decadence will set in.

Laws of social evolution: laws of society
In his Human Thermodynamics, based on Darwin’s premise that history has an evolutionary and detectable pattern Bazargan sets his eyes on defining the laws of this process and thus condemning those whose practices are against the direction of the laws of social evolution and who are therefore, in Bazargan's mind, are condemned to destruction. These people, Bazargan believes, are those in power, those who have subjected him and is associates to arbitrary practice of power and injustice. Bazargan's argument builds on the premise that in the same manner that the elements of a physical, chemical or mechanical phenomenon follow certain particular patterns in their relations with each other, the “social elements”, i.e. the individual persons, too pursue basic laws in their relations with each other. Bazargan thus elaborates a mechanical set of social relations.

Theories
Most of his conceptions, although biased in a detrimental manner by the supposed basis of deity (the infinite entity), are fairly humorous, mostly metaphor, and built on fudge-factor types of thermodynamic equations. In his article, “The Youth’s Islam [Islam-e Javan]”, for example, he discussed the Helmholtz free energy formula:

and replaced W, or effective energy (free energy), with human power of movement and production, U, or initial internal energy, with desire, need for love, T, or temperature, with value of possessions, and S, or entropy, with the amount of possessions. Then he tried to apply this formula to some Islamic moral teachings, and concluded that Islam intends to increase the human power of movement and production. Below are a few other examples:

Free will
In relation to free will, for example, Bazargan states: “when dealing with human societies and humans with free will, thermodynamic law and formulae require a coefficient, which can be called a balancing coefficient and is less than 1 in unbalanced societies and more than 1 in societies governed by true religions and affections.” [3]

“Thermodynamics might be able to say, though very vaguely, if there is going to be a resurrection and another world, how this may occur and what the other world may look like … In this way, we may be able to examine to what extent the signs of the other world, as provided by the prophets, are plausible. If these signs about the resurrection, paradise and hell form a reasonable and sensible related collection that new sciences, to some extent, affirm, then such beliefs are not baseless.”

Education
Bazargan was born in 1907 in Azerbaijan, though the exact date and details are not known. He completed his undergraduate college work at the Teacher Training Center in Tehran. He completed his graduate work at the Central School of Paris, where he earned a degree (MS or PhD) in mechanical engineering. [13] The exact school in Paris where he studies was, supposedly, the University of Paris (École Centrale des Arts et Manufactures), in the 1930's, where he focused on thermodynamics. Bazargan’s engineering studies in France, particularly in thermodynamics, according to Bazargan biographer Saeed Barzin (1992), were said to “make a deep impression on the young Bazargan encouraging human to revise his understanding of traditional Iranian religion and to acquire modern socio-political ideas.” [9]

After passing his compulsory military service, Bazargan joined became a lecturer in thermodynamics at the Teacher’s College of Technology (Tehran Technical College), at the invitation of the minister of culture Hekmat. [9] He became department chairman, a position which he held until 1962. From 1945 to 1950 he was dean of the Technical College and in 1952 to 1953 he was chief of the water refineries in Tehran. [13] In 1942, Bazargan tought at Teheran University, where he became the head of the first engineering department of Tehran University in the late 1940s, becoming known as one of Iran's best mathematicians; later he was awarded the chair of thermodynamics at the university's technical college. [6] From February 5, 1979, Bazargan was appointed prime minister of Iran by Ayatollah Khomeini, but resigned on November 4, following the US Embassy takeover and hostage taking, in protest of his government’s inability to free the hostages.

Family
Mehdi Bazargan fathered a son named Abdolali Bazargan (1943-), an Iranian liberal political politician, writer, and intellectual who is the leader of the Freedom Movement of Iran. He is one of five major figures in the Green Movement to author a manifesto calling for the resignation of Iranian President Mahmoud Ahmadinejad. Abdolali is married and has three children. He joined the National Front of Iran in 1961 but in 1963 he left party and enjoyed to his father's established party Freedom Movement in 1977. [17]

Quotes | On
The following are quotes on Bazargan:

“A brilliant professor of engineering, Mostafa Chamran (Ѻ) had taught at Berkeley and worked at NASA’s Jet Propulsion Laboratory. He was widely respected in Iranian academic circles as the only student at the University of Tehran to get a 100 percent on his thermodynamics test under Mehdi Bazargan, the school’s toughest instructor who would also become the first prime minister of the revolutionary government.”

Quotes | By
The following are quotes by Bazargan:

“There is no denying the fact that the heat of love puts many obstacles in his path. It melts it and it creates a wonderful buzz and its owner. Literary and artistic masterpieces and how many military conquest and political successes below the flames of love having achieved.”

“Society is a system which could be subject to regulations similar to the laws of physics, chemistry, or thermodynamics. Of course, it is a very complicated and extraordinarily more complex than a simple system of gas or a combination of water and steam.”

“Government shall belong to humans, not to priests or god. Mankind can rule over itself by its own laws, however not made by a single person, but by the whole nation.”