In mythologies, Mesopotamian mythology refers to []

Egyptian | Influence
In 1894, Robert Rogers, in his “The Origin of Egyptian Culture”, building on Fritz Hommel’s 1892 The Babylonian Origin of the Egyptian Culture has been Proved (wherein it is argued, incorrectly, that Egyptian language is a branch of the Semitic language), attempts to argue that prior to 2700BC or the pyramid period, the Egyptian people were in contact with the Assyro-Babylonian people, and that through this interaction the Egyptian derived their language, written and spoken, and borrowed their culture and religion, per reason that the Egyptian and Babylonian ideograms for common words such as: land, city, night, woman, house, day, and fish, are the same or have great resemblance.

While Rogers has his influence of ideas flow backwards, correctly it was Egyptian models and language that influence the Babylonians, he does point out some good etymology connections in respect to gods and towns; for example:

“One of the most ancient cities of Babylonia was Eridu (Ѻ). The name Eridu. in Babylonian was originally composed of two words, Urru-Dugga, which are found in a still older form as Gurru-Dugga, which means “city of the good (god).” In very earliest times the name was Nun-ki. This city of Nun-ki or Eridu was the center of the worship of the god Ea. The early literature of Babylonia is full of allusions to this city and to the worship of Ea which it represented. Ea was the ‘good god’, who drove away from his people the demons of darkness and death and disease.”

Of note, some, e.g. Gwendolyn Leick (2002) (Ѻ), argue that Eridu is the “oldest city in the world”, dating it’s founding to 5,400BC, the cuneiform tablets attesting to his mythos are relatively young (c.2100 to 600BC). Thebes, conversely, is the world’s oldest continuously inhabited city, since 3,200BC. (Ѻ) Rogers then states the following:

“The Babylonian creation stories represent a great chaos of waters as existing before the creation of the earth. When the earth was created there was stretched above it a great firmament studded with stars. Between this firmament and the earth was the air, the home of the god In-lilla or Bel. Above the firmament were the waters, the ‘ocean of heaven’, and beneath the earth were also waters, called by the Babylonians apsu; hence άβνσσος, and the English word abyss. But the waters above the firmament were in connection with the waters beneath the earth, the whole forming a great ocean somewhat similar to Homer's ωκεανός. The Babylonian name for this ocean was anum or anun, and in a still shorter form ‘nun’. We have said above that Eridu was also called Nun-ki. In Babylonian, ki means ‘place’; hence, this old name of Eridu, means ‘ocean-place’, a place so called, we might say, because it was the place of worship of Ea, the god of the earth and of the waters under the earth.”

Here, as Rogers points out, the ancient Mesopotamian city of Eridu was called "city of Nun", just as was the ancient Egyptian city of Heliopolis called "city of the sun born out of Nun". The question then becomes, which city was older, also where did the Nun motif or namesake arise? What we do know, however, is that the hieroglyph for Nun, from the Unas Pyramid texts (2500BC), is a pot or three pots (which makes the ocean sound) and the water wave symbol: [2]

or in some cases shown with these plus plus sky symbol

. We also know that this water wave symbol, became the forerunner to the English letter "N" as follows: [3] 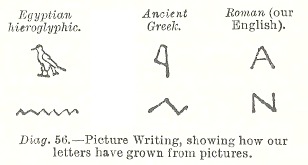 Now, while it could be possible that the Nun motif arose in ancient Sumer and was adopted by the Egyptians, the problem with this argument is that the rivers of Sumer, the Tigris and Euphrates, were not connected with mountains where snow melted annually, thereby flooding their rivers on a yearly basis, whereas the Nile River was connected with the Ethiopian mountains and its annual snow melting. Hence, this points to the conclusion that the Nun motif arose in Egypt and was adopted in Sumer.

Rogers the connections Nun-ki (the city Erudu) and Ea (the good god) is the following: