In science, metabolism refer so []

Overview
In 1779, Adair Crawford, in his Experiments and Observations on Animal Heat, outlined preliminary ideas on animal heat.
-
In 1783, Antoine Lavoisier and Pierre Laplace, in their Memoir on Heat, building on Crawford and others, began to initiate the field of metabolism, and thereafter conducted a number of experiments on humans.
In 1974, Henry Swan, in his Thermoregulation and Bioenergetics, published the following historical timeline of the development of metabolic theory: [1] 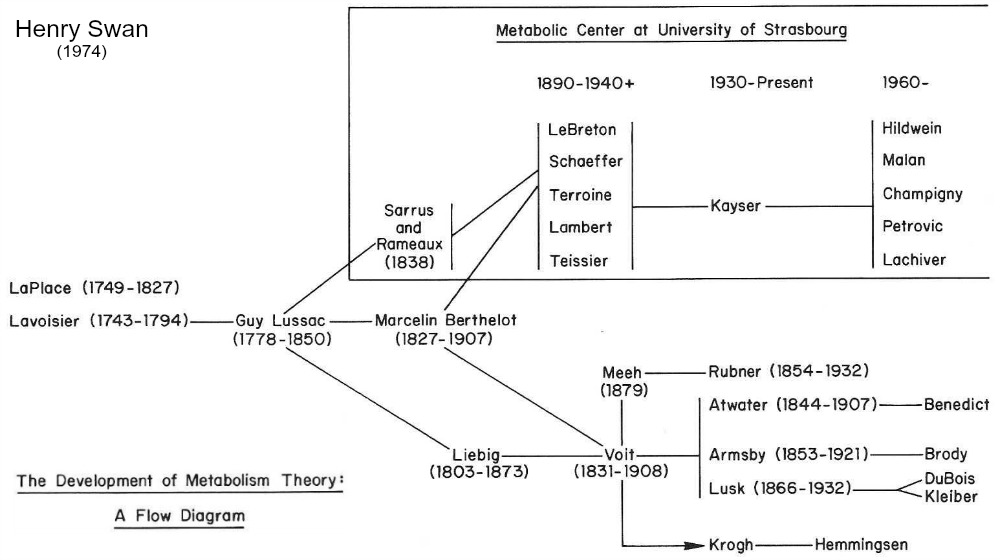 “If one had the kind of vision [e.g. electron microscope/quantum microscope] that allowed one [see: advanced perspective] to see molecules and were in a jungle, one would see molecules wandering about everywhere, at random. In this ceaseless wandering, one might recognize a locus in which molecules of various types were particularly concentrated, which held its form [bound state] approximately while myriads of molecules streamed in and out [turnover rate]; and that locus would be a monkey in the jungle. That continuous inflow and outflow of material [metabolism], and whatever of its structure endured, would not only make that a unique monkey from among monkeys but would ensure that it changed [see: Heraclitus] from moment to moment throughout its entire existence.”

References
1. Swan, Henry. (1974). Thermoregulation and Bioenergetics: Patterns for Vertebrate Survival (pg. xi). American Elsevier Pub. Co.
2. (a) Wald, George. (1965). “Determinism, Individuality, and the Problem of Free Will” (pg. 24), in: New Views of the Nature of Man (editor: John Platt). University of Chicago Press.
(b) Scott, George P. (1985). Atoms of the Living Flame: an Odyssey into Ethics and the Physical Chemistry of Free Will (pg. 39). University Press of America.