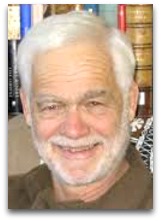 In existographies, Michael Nauenberg (1934-2019) was a German-born American physicist, noted for his 2008 to 2015 work on anomalous suspension.

Overview
In 2008, Nauenberg, repeated Huygens “anomalous suspension” experiment, on video, at one of the University of California, Santa Cruz, physics labs, wherein you can see that when one does the vacuum-in-vacuum experiment with normal water, that when the void begins to increase in the receiver, that bubbles in the water begin to form and rise to the top or Torricelli space, as though the water were “boiling at room temperature” as Boyle had previous described this phenomena: [1]

One can see that the Torricelli water column, on the left, containing the previously air purified water, i.e. water with the air boiled out beforehand, does not fall as the void in the receiver increases. [1]

In 2015, Nauenberg, in his “Solution to the Long-Standing Puzzle of Huygens’ Anomalous Suspension”, states that the phenomena of anomalous behavior has remained an unsolved phenomena to this day, but attributes it to molecular adhesion, in the airless water, between the water molecules and the glass; possibly something related to the capillary action phenomena. Nauenberg says that in the normal water, the bubbles bread up the water, or something along these lines, thus letting the column fall. [2]

Quotes | By
The following are quotes by Nauenberg:

“Contrary to Galileo, however, Torricelli [1644] reasoned that the column of mercury was held up by the ‘pressure’ of the surrounding atmospheric air. This explanation also had been proposed, independently, by Isaac Beeckman [c.1620].”