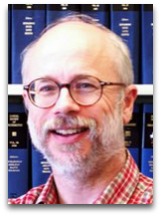 In hmolscience, Michael Behe (1952-) (CR:5) (CIR:1) is an American biochemist, noted for his 1996 Darwin’s Black Box, wherein, via distorted biochemistry presentations, argues that certain cellular structures, e.g. the bacterial flagella, are “irreducibly complex”, i.e. too complex to be reduced to chemistry and physics, and therefore the products of a divine creator.

Cellular watchmaker analogy
The gist of what Behe argues, in short, in an extension of English Christian apologeticist William Paley’s 1802 “watchmaker” analogy (Ѻ), namely that if a watch works via mechanical parts and mechanism, and was made by a creator, the similarly if the cell works via mechanical parts and mechanism then it too must have a creator; in circa 2003 interview with Lee Strobel, Behe explained his reasoning as follows:

“If the creation of a simple device like this device [motioning to a mouse trap] requires intelligent design, then we have to ask: ‘what about the finely tuned machines of the cellular world?’ If evolution can’t adequately explain them, then scientists should be free to consider other alternatives.”

Behe then goes on to use the bacterial flagella as his upgrade to the Paley watch.

Other
Behe states that he was an "agnostic scientist", while in school, until he came across Michael Denton's Evolution: a Theory in Crisis (1985), which inspiration him towards "intelligent design" theory. [2]

In 1997, Behe met American mathematician Granville Sewell, who informed Behe that he could find more support for his intelligent design theory in mathematics, physics, and computer science.

“Thus it seemed to Haeckel that such simple life could easily be produced from inanimate material.”

“A draft of Pandas and People’s sequel, The Design of Life, had been previewed during Dover’s trial (2005). Just as Foundation for Thought and Ethics substituted the word ‘creationism’ with ‘intelligent design’—following Edwards vs Aguillard (1987) —throughout versions of Pandas, this edition substituted ‘sudden emergence’ for ‘intelligent design’. This prompted Rothschild to ask Michael Behe during cross-examination, ‘will we be back in a couple of years for the ‘sudden emergence’ trail.”