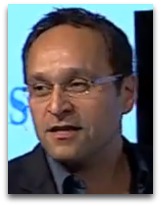 In hmolscience, Michael Brooks (1970-) is an English quantum physicist noted for his 2005 article “13 Things That Don’t Make Sense” wherein he ventures into the absurdities of the what is "life" question and asks whether humans are more than just a bag of chemicals.

Overview
In 2005, Brooks, in New Scientist, penned the provocative article “13 Things That Don’t Make Sense”, which expanded into a 2008 book by the same title, in which he explores the anomaly-soaked query, on the lines of a person defined as a human molecule or human chemical, that:

“Are you more than just a bag of chemicals?”

This tag-line, asking whether humans, as chemicals or molecules, are somehow different than any other type of chemical or molecule in the universe, forms the basis of his chapter five, which summarizes the modern view that the theory of “life” is one of the big five things of modern science that makes no sense (along with the dark matter problem, the pioneer anomaly, varying constants, and cold fusion), being that the theory of life implies certain bundles of chemicals, such as humans, are alive, whereas all other chemical collections of matter are dead or not alive, supposedly the remainder of the entire universe. [1] Brooks summarizes the now-established defunct theory of life, an issue that arises when searching for the so-called “origin of life”, which is nothing but a search for the philosopher’s stone or a type of perpetual motion molecule. [2] Brooks cites Erwin Schrodinger (What is Life?, 1944), Paul Davies (The Fifth Miracle, 1999), and Lynn Margulis (What is Life?, 1995), Stuart Kauffman, among others.

Brooks cites Austrian physicist Erwin Schrodinger's famous 1944 What is Life? booklet, as being the pioneer to dig into the physical roots of the issue, summarizing the view that Schrodinger concluded that life is the one system of the universe that turns the natural progression of entropy, effectively moving disorder to order, so to speak. This viewpoint, however, is a huge misunderstanding of the second law, which according Clausius states, in full, that the equivalence value of all uncompensated transformations tends to a maximum. The view that the second law states that all systems of the universe tend to maximal disorder is a contrived appended view, applicable only to certain discussions.

According to Brooks, the fifth big thing of modern science that doesn't make sense is life. Brooks explains how traditionally there have been three ways to unravel the essential nature of life.

(a) Find out how it started: trace the life back to the point where all that existed was chemistry. A pictorial view of the evolution timeline, however, shows this to be a futile effort, in that the only demarcation one can find is the sub-atomic to atomic transition point of the universe, approximately 13.5-billion years ago.
(b) The second method, according to Brooks, is to build something that is “alive” from scratch: take chemicals and put them together in ways that make them come alive. The 1952 Urey-Miller experiment, of course, is the poster child of this endeavor. More recent attempt in this direction, include: cloning, making test tube babies, bring back to life extinct species using preserved DNA samples, etc. In nanotechnology, building things atom-by-atom, such as walking molecules, driving molecules, etc., is another type of proto-like life.
(c) Lastly, according to Brooks:

“[The third option is] to sit down and think about what exactly is it that marks the difference between living matter and nonliving matter and come up with the 'definition of life'. It is this latter path that is perhaps the most well trodden. It is also the one widely admitted to be a dead end.”

In other words, it has become a guarantee that once a new criterion-based definition of life is put forth, it will only be a matter of time before a disproof becomes apparent.