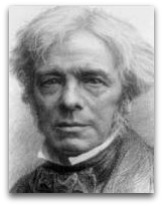 Electromagnetics
In 1831, Faraday made his big discoveries; this is summarized as follows: [6]

“Faraday was convinced that if electricity could produce magnetism, as Oersted had found, then magnetism could produce electricity. He had been searching for electricity which could be produced by magnetism for a half dozen years before he came upon the principle of induction in 1831. It was in this year that he, for the first time, realized that a current was induced in a conductor while the intensity of a magnetic field was either increasing or decreasing or while the conductor was being moved in the magnetic field. Faraday also found that he could produce a current in one of two coils by moving the coils toward or away from each other while a current was flowing in the second coil. He then substituted a magnet for the coil carrying the current and produced the same effect. Using two coils wound on separate sections of a closed iron ring, with one coil connected to a galvanometer and the other to a battery, Faraday observed that when he completed the circuit to the second coil, the galvanometer needle jerked in one direction and then returned to zero. When he broke the battery circuit, the galvanometer jumped about the same distance in the opposite direction and again returned to zero. In 1831, Faraday also demonstrated that by rotating a copper disk between magnetic poles he could generate direct current. It is on these discoveries that the mechanical production of electricity is based. Thus, Michael Faraday had found not only the basic principle of the electric motor but also the basic principle of the generator and of the induction coil and transformer.”

Education
Faraday was a self-taught type of person, having had little formal education. At the age of 14, he began to educate himself by voracious reading books, such as Isaac Watts’ The Improvement of the Mind (1727) and Conversations in Chemistry (1805) by Jane Marcet (who herself had attended Humphry Davy's lectures), which he came across during his seven year apprenticeship at a local bookbinder and bookseller owned by George Riebau. At the age of 20, Faraday began to attend the lectures of English chemist Humphry Davy, after which he became Davy’s protégé. Faraday later became head the Royal Institute.

Notes
His greatest weakness, has many have commented, was his limited mathematical ability, which fortuitously worked to confine him more to experimental investigations, rather than to theoretical endeavors.

Quotes | Employed
The following are quotes employed by Faraday:
91)

“Spend a few thoughts sometimes on the puzzling inquiries concerning vacuums and atoms, the doctrine of infinites, indivisibles, and incommensurables in geometry, wherein there appear some insolvable difficulties: do this on purpose to give you a more sensible impression of the poverty of your understanding and the imperfection of your knowledge. This will teach you what a vain thing it is to fancy that you know all things, and will instruct you to think modestly of your present attainments.”

Quotes | On
The following are quotes on Coulomb:

“Ohm found that the results could be summed up in such a simple law that he who runs may read it, and a schoolboy now can predict what a Faraday then could only guess at roughly. By Ohm's discovery a large part of the domain of electricity became annexed by Coulomb's discovery of the law of inverse squares, and completely annexed by Green's investigations. Poisson attacked the difficult problem of induced magnetization, and his results, though differently expressed, are still the theory, as a most important first approximation. Ampere brought a multitude of phenomena into theory by his investigations of the mechanical forces between conductors supporting currents and magnets. Then there were the remarkable researches of Faraday, the prince of experimentalists, on electrostatics and electrodynamics and the induction of currents. These were rather long in being brought from the crude experimental state to a compact system, expressing the real essence. Unfortunately, in my opinion, Faraday was not a mathematician. It can scarcely be doubted that had he been one, he would have anticipated much later work. He would, for instance, knowing Ampere's theory, by his own results have readily been led to Neumann’s theory, and the connected work of Helmholtz and Thomson. But it is perhaps too much to expect a man to be both the prince of experimentalists and a competent mathematician.”

“Faraday showed that a wire suspended with one end free to move and dipping into a bowl of mercury would revolve continuously around a permanent magnet supported in the mercury as long as the wire and the mercury were connected to opposite poles of an electric battery. This discovery of electricity producing motion was the fundamental discovery which eventually led to the invention of the electric motor.”

Quotes | By
The following are quotes by Faraday:

“Let us now consider, for a little while, how wonderfully we stand upon this world. Here it is we are born, bred, and live, and yet we view these things with an almost entire absence of wonder to ourselves respecting the way in which all this happens. So small, indeed, is our wonder, that we are never taken by surprise; and I do think that, to a young person of ten, fifteen or twenty years of age, perhaps the first sight of a cataract or a mountain would occasion him more surprise than he had ever felt concerning the means of his own existence: How he came here; how he lives; by what means he stands upright; and through what means he moves about from place to place. We come into this world, we live, and depart from it, without our thoughts being called specifically to consider how all this takes place; and were it not for the exertions of some few inquiring minds, who have looked into these things, and ascertained the very beautiful laws and conditions by which we do live and stand upon the earth, we should hardly be aware that there was anything wonderful in it. These inquiries, which have occupied philosophers from the earliest days, when they first began to find out the laws by which we grow, and exist, and enjoy ourselves, up to the present time, have shown us that all this was effected in consequence of the existence of certain forces, or abilities to do things, or powers, that are so common that nothing can be more so; for nothing is commoner than the wonderful powers by which we are enabled to stand upright: they are essential to our existence every moment.”