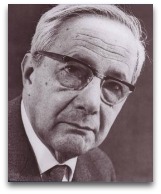 In existographies, Michael Polanyi (1891-1976) (CR:26) was a Hungarian-born English physical chemist noted for his 1931 potential energy surface model, co-developed with Mexican-born American theoretical chemist Henry Eyring, during their work on hydrogen-hydrogen interactions; for his 1935 work together with Eyring and Meredith Evans in the development of transition state theory; and for his 1947 switch into the humanities, wherein he concerned himself mainly with the philosophy of science, economics, and sociology.

Antireductionist philosophy
Polanyi was of the view that life is not reducible to physics and chemistry. [1] Polanyi, in his 1967 Chemical & Engineering News cover story article “Life Transcending Physics and Chemistry” (a rebuttal to English geneticist Francis Crick's 1966 reductionsim book Of Mice and Men), wherein he attempts to disprove the following emerging view (since 1953 the discovery of the structure of the DNA):

"The discovery by Watson and Crick of the genetic function of DNA (deoxyribonucleic acid), combined with the evidence these scientists provided for the self-duplication of DNA, is widely held to prove that living beings can be interpreted, at least in principle, by the laws of physics and chemistry."

Polanyi's anti-reductionism argument, in short, is that DNA does nothing but "transmit information", the "transmission of information is nonchemical and nonphysical", therefore the "description of a living system transcends the chemical and physical laws which govern its atomic constituents." He concludes that: [7]

“All objects conveying information are irreducible to the terms of physics and chemistry.”

Polanyi’s article is abstracted as follows: [8]

“When I say that life transcends physics and chemistry, I mean that biology cannot explain life in our age by the current workings of physical and chemical laws.”

In the context of the reduction vs anti-reduction debate, he seems to have been an adherent of the unbridgeable gap model.

In his 1968 "Life's Irreducible Structure" (1968), Polanyi argues that the information contained in the DNA molecule is not reducible to the laws of physics and chemistry. Although a DNA molecule cannot exist without physical properties, these properties are constrained by higher level ordering principles. [4]

In his 1970 "Transcendence and Self-transcendence", he criticizes the mechanistic world view that modern science has inherited from Galileo. [5]

Polanyi, similar to many in modern time, advocates the emergence point of view, i.e. the claim that there are several levels of reality, and causality, on the assumption that boundary conditions supply degrees of freedom that instead of being random are determined by higher level realities whose properties are dependent, but distinct, from the lower level from which they emerge.

To a good approximation, Polanyi seems to be well-classified as an ontic opening theory based philosopher.

Other
British biochemist and Chinese chemistry historian Joseph Needham, supposedly, consulted Polanyi in the writing of his 1942 article “Evolution and Thermodynamics: a Paradox with Social Significance”. [2]

American military thermodynamicist John Boyd was influenced by Polanyi’s 1969 Knowing and Being in the development of his war thermodynamics combat models.

Polymathy
Polanyi is sometimes characterized as a polymath of sorts, owing to his many and scattered interests in a wide variety of fields, including medicine (1913 degree) and six subfields of physical chemistry (1919 PhD), epistemology, economics, patent law, social and political theory (humanities chair), aesthetics, and theology. [3]

Religion
There are seemingly many religiously-minded Polanyi followers who find refuge in his writings to the conclusion that religion and science can be bridged or that the universe contains a god, or something along these lines; although it does not seem to be the case that Polanyi was overt and open about his religious beliefs. [6] Polanyi was Hungarian from a non-observant Jewish family; his mother was called "Aunt of the Hungarian Revolution." He was baptized as a Catholic in 1919, but apparently only as a matter of convenience—he wanted to live and work in Germany, and it was better to have a Christian identity on one's passport rather than Jewish. Later in life, he associated most closely with the Protestant point of view. [3]

Polanyi’s writings, although not explicitly religious, have attracted the attention the theologians and apologeticists (Ѻ); Polanyi’s literary executor at his death (dereaction) was reformed theologian Thomas Torrance, who argues for some type of Polanyian natural theology, such as addressed in Colin Weightman’s Theology in a Polanyian Universe: the Theology of Thomas Torrance (1994). (Ѻ)

Quotes | By
The following are quotes by Polanyi:

“Chemistry, indeed, leads us so far away from physics—or let us say, that physics appears, when we look at chemistry, so far remote from everything else in the world—that the description of chemical substances and the art of dealing with them lies quite near, by comparison, to the types of human behavior and the art of commanding human behavior.”