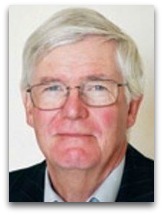 In hmolscience, Michael Rowan-Robinson (1942-) is an English astronomer and astrophysicist noted for his 1999 The Nine Numbers of the Cosmos, wherein, in his opening chapter “We Exist”, section: “A Team of Atomies”, he describes people as bags of chemicals: [1]

“What are we made of? Bones, flesh, blood, skin? The four humours of the alchemists? A bag of chemicals? The idea that turns out to be really powerful is that we are made of atoms. This was suggested by a group of Ionian philosophers of the sixth century BC, especially Leucippus and Democritus, the greatest of the so-called pre-Socratics.”

The “bag of chemicals” description of people (see also: soulless bag of chemicals), employed here by Rowan-Robinson, seems to be stylized or based on Richard Dawkins’ 1986 description of how the bombardier beetle is filled with the defense-mechanism chemical hydroquinone 6H4(OH)2 and hydrogen peroxide H2O2, which the beetle squirts out in defense in times of distress or danger. [2]

“When wood burns, humours, vapours, and phlogiston have nothing to do with the case. Two atoms of the element oxygen combine with an atom of the element carbon to make a combination of atoms bound together, a molecule of carbon dioxide.”

“Humans are an interesting form of baryonic matter.”