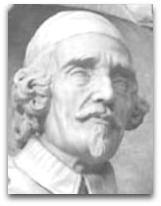 In existographies, Michelangelo Ricci (1619-1682) (CR:4) was an Italian mathematician and cardinal, noted for []

Overview
On 11 Jun and 28 Jun 1644, Evangelista Torricelli wrote to Ricci discussing his new mercury experiment on making a vacuum; these are, supposedly, the only two extant documents by Torricelli describing his experiment. [1]

“It was the Epicureans’ opinion that not only could the vacuums naturally occur, but that in fact many empty spaces were found in the world, as V.S. will remember having read about Lucretius. Some theologians opposed them, who jealously indiscriminate about the union and conservation of the universe, to which they esteem the obedience of creatures directed in ascending or descending is directed, according to the reason of contact, with saying that not even the divine omnipotence could operate in such a way that this empty space is said which the Epicureans say, but I apologize in part to these good theologians, who perhaps, in order not to acquire a bad name after the world of being Epicureans, all the more competing in them for some other clue taken from their actions, they have wanted to be more able to dwell on their feelings, as they claim to be believed to be distant in operating from the style of that, here [Bacchanalia vivunt Epicuri de grege porcis] [English].

Let this be said with reverence of V.S., which I would not like to bore with another, which I could add to you in this matter, since I esteem that you will be too nauseated by the rash opinion of the aforementioned theologians, and by her constant habit of immediately misusing the things of god in natural reasoning, where those should with greater respect and reverence be treated. The way with which V.S. saves the experiences made as proof of the vacuous, that is, of ascending the grave things against his natural inclination, I judge him so much better than the other, as with this we conform to the simplicity of nature in his works; which being able to save the union of the bodies with the sole motion down, in vain would have grafted to them a new natural inclination to obey the universal moderating cause of the world, as they say. And I admire the noble boldness of V.S. in having in mind what does not touch from truth until now, which has likewise so much of probability that, with two or three objections, which are to say to V.S., which I pray I will resolve, as I know, that you will be able to do easily, I estimate to be the most true and the most reasonable, which can be said in this matter.

First of all, it seems to me that the action of the air could be excluded in gravitating on the extrinsic surface of the silver that is in the vase, placing a cover with a hole in it, for which the glass rod passes, and then completely closing every part , so that the air higher than the vessel, which would in this case no longer gravitate on the surface of the silver but on the lid, could no longer be communicated to it, and thus remaining the living silver suspended in the air as before, one does not could no longer attribute the effect to the weight of the air, which supports it almost in equilibrium.

Secondly, having taken a syringe, which wants to be used a great deal in this subject and has its piston inside of itself, so as to exclude with its corpulence every other body, then closing the hole at the top, and withdrawing by force the piston back, we feel great resistance, and this does not follow only keeping down the syringe, and turning up the piston, above whose handle the air rests, but it follows for every verse that it is made; and yet it does not seem that in these cases it is easy to understand how the weight of the air has to do with it.

Finally, a body immersed in water does not conflict with all the water, which is above it, but with the only the one that moves to the motion of the immersed body, which is not greater than its body and because I would estimate that the same doctrine was from apply to the changes of silver, it should contrast with as much air as is its bulk; and how could the air ever preponderate?

This is what gave me my nonsense in opposition to the sense of V.S., in which he will have to excuse the desire, which I want to perfectly understand the solution of the objections to the contrary to be then absolute defender, since I am sincere admirer, and of this , and every other invention by you to me all very gratified [...]”

Torricelli, in his reply letter, explained these objections. [2]

In Oct 1644, Marin Mersenne visited Torricelli, during which time Torricelli repeated the experiment for him and gave him copies of his letters to Ricci. Mersenne took these to Blaise Pascal and others in France, disclosing Torricelli’s work publicly for the first time. [4]

Quotes | By
The following are quotes by Ricci:

“I estimate that you will unfortunately be too nauseated by the temerarious opinion of these theologians, and by their constant habit of mixing up things of god with natural questions, where they should instead be treated with greater respect and reverence.”