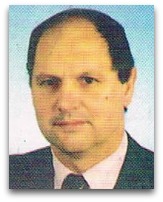 In hmolscience, Mieczyslaw Dobija (1943-) is a Polish economist (Ѻ) noted for []

Overview
In 2004, Dobija, in his “Theories of Chemistry and Physics Applied to Developing an Economic Theory of Intellectual Capital”, via citation to: Irving Fisher (1919), Nicholas Georgescu-Roegen (1971), Frank Lambert (1997), and Valery Chalidze (2002), attempted to outline a semblance of a thermodynamic theory of capital, arguing to the effect that entropy has something to do with risk and energy in a social body constitutes its capital, or something along these lines; the following is his abstract: [1]

“Successful entrepreneurs employ a variety of assets with the objective of seeking unusually high returns on invested financial capital. Intellectual entrepreneurs effectively use some intangible factors, like intellectual capital, to reach impressive results. Each asset employed by entrepreneurs involves a category of capital. Capital, in its sense of being used to do something is analogous to a property in physical science that is labelled as 'energy'. Energy is often defined as the capacity to do work. And thermodynamics is a field in which the applications of energy and heat are thoroughly studied. Thermodynamics provides a useful analogy for understanding intellectual capital. Intellectual capital is best described as a low entropic component involving both the human mind and human spirit in will-directed actions that forms a special quality of intellectual entrepreneurship. The second law of thermodynamics is a key to understanding the properties of energy and is used as a prime analogy for understanding capital and its theories.”

Here we note the metaphysical religio-mythology term "spirit" intermixed with thermodynamics, which is a red flag.

Education
In 2005, Dobija was associated with the Cracow University of Economics.