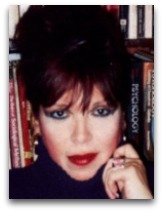 In hmolscience, Migene Gonzalez-Wippler (c.1950-) is a Puerto Rican cultural anthropologist turned new age author noted, in cessation thermodynamics, for her 1987 to 1997 publications arguing to the effect that the first law substantiates the view that there is a creative intelligence at work in the universe and therein afterlife exists.

Overview
In 1987, Wippler, in her Kabbalah for the Modern World, used thermodynamics and entropy to make a case for the existence of a creative force at work in the universe. [3]

In 1997, Wippler, in her What Happens After Death, attempted to build a theory of death on the first law of thermodynamics; the following being an introduction her theory: [1]

“We want to establish a theory about what happens after we die. In order to do this, we must first provide a foundation for this theory, and this foundation is the first law of thermodynamics. This law states that energy can neither be created nor destroyed.”

On this footing, according to book reviews, Gonzalez-Wippler builds the first few chapters in the theme of a clear concise scientific look at the occult, but then digresses off on a tangent toward the end of the book. In terms of God-like theories, Gonzalez-Wippler reasons that there is enough scientific evidence to prove the existence of a creative intelligence at work in the universe. [2]