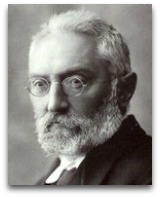 In philosophy, Miguel de Unamuno (1864-1936) (DN=1-5) was a Spanish philosopher noted for his 1912 book The Tragic Sense of Life, in which, similar in style to Pierre Teilhard, he discusses, and in some ways attempts passing reconciliation, between the growing collision between modern science and religion (see: science and religion), the dividing line between the two being, in his view, entropy, at the mention of which he inserts and extra dividing space between paragraphs, only done once in the book, a term which he equates to “a kind of ultimate homogeneity, a state of perfect equilibrium, the most like nothingness the mind can conceive [at the point which] universal existence will be obliterated and lost.” [1]

According to New Scientist writer Martin Sherwood (1971) one is not “two cultures” literate if he or she does not know both the second law and Miguel de Unamuno; who supposedly together with Ortega y Gasset (1833-1955) hold the distinction of being Spain's most influential philosopher. [2]

Hypothesis of god | Hypothesis of ether
The gist of Unamuno’s book is to explicate his resolutions between his deadlock on the tensions of faith and reason, vacillating at times between doubt in the existence of god and belief in the existence of god, resulting in the end to side with belief based on his belief or effort to believe in the survival of the will to live, or something along these lines. The following is a decent section:

Prior to these, Unamuno also points out that Pierre Laplace, in his circa 1802 Q&As with Napoleon Bonaparte, was the first to openly and plainly declare the “hypothesis of god” to be an unneeded hypothesis, in the explanation of universal operation and movement.

Problem of evil
One interesting human physics like position that Unamuno takes is to explain the great problem of evil in terms of the principle of inertia, otherwise known as the first law of motion (see: laws of motion):

"The origin of evil, as many discovered of old, is nothing more than what is called by another name the inertia of matter, and, as applied to the things of the spirit, sloth. and not without truth has it been said that sloth is the mother of all vices, not forgetting that the supreme sloth is that of not longing madly for immortality."

A down side of his argument is that prior to this statement, he states that in the depths of the bodies of "humans, animals, plants, rocks, and in all the universe" there is spirit-matter (similar to the view held by Pierre Teilhard), or spirit that limited by the matter in which it has to live and acquire consciousness of itself. These views were common to many looking to find religion-science reconciliation back in the early 20th century.