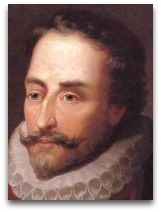 Overview
In 1615, Cervantes published in his realism novel Don Quixote, which is cited by Henry Finck, in his Romantic Love and Personal Beauty (1887), subsection the history of social gravitation theories and human chemical affinity theories, as follows: [1]

“In the preface to the first volume of Don Quixote, Cervantes refers those who wish to acquire some information concerning love to an Italian treatise by Judah Leo [Judah Leon Abravanel, c.1465-c.1523]. The full title of the book, which appeared in Rome in the sixteenth century, is Dialoghi di amore, Composti da Leone Medico, di nayione Ebreo, e di poi fatto cristiano [Dialogues of Love, composed by Doctor Leon, of Hebrew heritage, and who later became Christian]. There are said to be three French translations of it, but it was only after long searching that I succeeded in finding a copy, at the Bibliotheque Nationale in Paris. It proved to be a strange medley of astrology, metaphysics, theology, classical erudition, mythology, and medieval science. Burton [Robert Burton, 1577-1640], in the chapter on love, in his Anatomy of Melancholy, quotes freely from this work of Leo, whom he names as one of about twenty-five authors who wrote treatises on love in ancient and medieval times.”

This paragraph, to note, surrounded by discussions of Empedocles, Goethe, Ludwig Buchner’s views on physical science based love, and Robert Burton (1652) puzzling about what love has to do with the loadstone drawing iron and or the “ground coveting showers”.

As GLAE candidate, his Don Quixote was ranked by the Norwegian Book Club’s 2002 100 Best Books of All Time listing as the “best literary work ever written”, based on 100 top ten lists, submitted by a 100 writers, from 54 countries; a book notably read by Albert Einstein and his Olympia Academy group (see: Filon-Pearson demon).