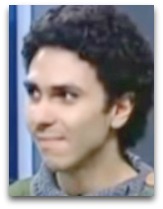 Overview
In c.2015, Hisham, in his early 20s, began to frequent various atheist forums, in particular the popular Atheist Republic, founded by Armin Navabi (2011).
-
In early 2018, Hisham saw an advert on the Atheist Republic forum, which said that the Egyptian TV show Alhadath Alyoum TV, which roughly translates as “The Event News” or “Egyptian Street TV”, was looking for young atheists to come on the show for open dialogue.

On 11 Feb 2018, Hisham appeared on Alhadath Alyoum TV, wherein he was pitted up against Mahmoud Ashour, a Sheikh, described as “former deputy Grand Imam of Al-Azhar” (Ѻ), and Mahmoud Abd Al-Halim, the TV show host, who is like an Islamic Bill O’Reilly on amphetamines. The dialogue, translated by translated by the Middle East Media Research Institute (MEMRI), went as follows (bolded comments signify shouting or raised voice; continuation dots signify an interruption): [4]

Hisham: I don’t need religion to have moral values or to be a productive member of society.

Sheik: Why did you become an atheist?

Hisham: Because there is no scientific evidence for the existence of god.

Host: How can you say that! Who created you? Who made you exist as a human being?

Sheik: Do you know how you were created?

Hisham: There are many theories explaining our existence on this planet …

Sheik: I’m asking you a question. How did you become a human being?

Host: How come you exist in this universe?

Hisham: Ok, let me explain. There are theories that try to explain our existence. One theory is that god created us. Okay? But there are other theories, which much more evidence, like the big bang theory …

Host: Speak Arabic! You are in Egypt, and you are addressing simple people, so don’t use big words for no reason.

Hisham: I’m using these terms because science is conducted in English …

Host: What science are you talking about?

Host: You are confused and unreliable.

Host: You deny the existence of god and reject our religion and principles …

Hisham: Is that so bad?

Host: Of course. You come here to talk about a certain idea, but have nothing to offer.

Host: I apologize to the viewers for having an Egyptian of this kind on our show.

Host: I’m sorry, Mohammad, but you cannot stay with us on the show, because your ideas are inappropriate, I’m sad to say. We cannot promote such destructive ideas. You have not uttered one single convincing word.

Host: It’s like Sheik Mahmoud says. Have you seen a psychiatrist?

Host: I advise you to leave the studio and go straight to a psychiatric hospital.

Host: You shouldn’t be here. Unfortunately, I cannot let you be here anymore. Please get up and leave, and I will continue the show with Dr. Mahmoud …

Host: Let us take a break, our guest will leave the studio, and we will continue with Dr. Mahmoud …

Hisham: I’m not being allowed to present my ideas …

Host: No. Again, let me apologize to my viewers, for having such a person on the show. I invited him on the show, to talk about ideas, but unfortunately, he has nothing convincing, nothing substantial, to offer. He sets a bad example to Egyptian youth.

Host: Mohammad, you can’t stay here. I advise you to go straight to a psychiatric hospital.

Hisham then left the studio. The show received received 10s of millions of views worldwide, in the Islamic world, and then later in the English world, e.g. on YouTube. Hisham then began to face social opprobrium, e.g. death threats, job barring, family disownment, etc.
-
On 13 Mar 2018, Hisham went on national television a second time, via video stream, on a show called show called “Shaba Talk” (or "Youth Talk"), located in Berlin, as shown adjacent, wherein he was pitted up against the same host and another person, and new more neutral and open minded host. [5]
-
On 17 May 2018, Sam Harris tweeted (Ѻ) Hisham’s GoFundMe campaign, after which the rest of the donations and famous names in the public discourse fell into place from that point. [2]

Other
Hisham has also publicly acknowledged that he is "openly gay" (see: queer chemistry), which is a crime in Islamic countries, punishable by being thrown off the roof. [4]
Quotes | On
The following are quotes on Hisham:

“This guy’s balls are 1000 pounds each and made of titanium.”

“An advert post on Atheist Republic intrigued the now 26-year-old. There was a call for atheists in Egypt to appear on a popular TV show to discuss their ideas. A way to reach a large audience and do something to stem the decades-long rising tide of conservative Islam strangling his homeland was needed. Mohamed and a handful of others decided to find out if this was that way. By the fateful day of airing, however, the handful had dwindled to one. During the drive to the studio, that one thoughtful young atheist weighed the cost and chose to proceed.”

Quotes | By
The following are quotes by Hisham:

“I am Mohamed Hisham, and I am a public atheist in Egypt. The first step to a society that has freedom from religion is to stand up and be heard. I did that, appearing on TV twice, and immediately paid a price. Family, society, and now the state have declared themselves my enemy, with beatings at home, credible threats of death from across Egypt, and constant fear of jail my new reality. I can no longer peacefully express myself in this place. I can’t win here on my own.”