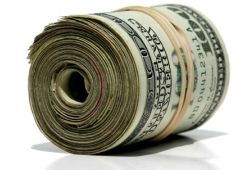 In hmolscience, money, the basic unit in the medium of exchange on quantities of value, is often compared to energy; often considered to have a relationship to thermodynamics. [1]

Overview
The task of quantifying energy in human social and economic systems, comparable to that in a physics system or steam engine, is new area of research and very difficult to do. As such, the majority of current models of quantifying money thermodynamically fall short, but are often good starting points. An example of a popular quote, outlining this view, comes from American quantum computer theorist Seth Lloyd: [3]

Thermodynamics
The line of logic followed, by some, in the course that money is a form of energy that is conserved, is that “value has to be conserved” (an 1979 postulate), that value and energy might have similar functions, and that there may exist a “conservation of money” law, similar or analogous to the conservation of energy, in economics. [2]

On face value this logic seems compelling. In unique cases, such as the fall of a government, wherein a system’s currency becomes valueless, the idea that the energy equivalent of a piece of paper, e.g. confederate dollars after the American civil war, is conserved somehow, loses face.

In 1853, German economist Hermann Gossen, in his Development of the Laws of Human Exchange and the Consequent Rules of Human Action, used a variant of the conservation of force to attempt a formulation of a calculus of human pleasures, theorizing on how Kräfte (or forces) operated in the course of human economic exchanges, on the premise that the aim of each individual is to maximize his or her total life pleasure.

Dozens of others in century to follow attempted to relate "money" to "energy" in some way or another.

In 2000, physicist Victor Yakovenko and Romanian-born American physicist Victor Yakovenko argue that “In a closed economic system, money is conserved. Thus, by analogy with energy, the equilibrium probability distribution of money must follow the exponential Boltzmann-Gibbs law characterized by an effective temperature equal to the average amount of money per economic agent.” [5]

In 2007, Russian bioelectrochemist Octavian Ksenzhek argued that money can be considered as a virtual form of energy and that energy coupling in social systems is mediated by materialized forms of energy, such as money. [4] Ksenzhek argues that the role of money in social systems may be compared with that of ATP (adenosine triphosphate) in biochemical systems, both of which act as energy carriers. Ksenzhek conceives of the entropy of money as the product of the quantity of the money multiplied by its specific entropy, such that the more dispersed the money is, the greater is its specific entropy.

Human chemistry
In the logic of human chemical thermodynamics, in which the “agents” of an economic system are considered as “molecules” (human molecules to be exact), money is considered as a “secondary field particle”, that which mediates a force. [6]

Quotes
The following are popular quotes:

“Nothing in life is certain except death, taxes and the second law and the second law of thermodynamics. All three are processes in which useful or accessible forms of some quantity, such as energy or money, are transformed into useless, inaccessible forms of the same quantity. That is not to say that these three processes don't have fringe benefits: taxes pay for roads and schools; the second law of thermodynamics drives cars, computers and metabolism; and death, at the very least, opens up tenured faculty positions.”