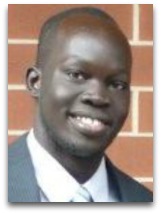 In philosophy, Monydit Malieth (1986-) (CR=6), aka Tonnerre, is a Sudanese philosopher noted for his 2013 The Future Affects the Past: What Destination is Time Rushing To?, wherein he attempts to stitch together ancient knowledge, from Egypt, to Greece, together with Christianity and Islam, up though modern atheism philosophers, such as Friedrich Nietzsche and Arthur Schopenhauer, in particular, and Goethe, in a few places, to outline agnostic leaning on near atheism type of Spinoza deism-like philosophy, i.e. a Schopenhauerian-Nietzschean themed Spinozan deism as he seems to present.

Philosophers
The main philosophers Malieth employs in his work, from his endnotes section “Philosophers”, are as follows—ordered seemingly according to usage rank—numbers showing being those in Hmolpedia citation ranking top 100, hence indicative of the seeming conclusion that Malieth is very hmolscience-minded in his thinking, god belief aside:

The following, mythological figures, whom Malieth seems to think were real people, are exorcised from the above listing: Buddha, Jesus Christ, Moses, Mohammed, and St. Paul.

Osiris | Jesus
Malieth is keen to the Osiris Jesus connection:

Ironically, however, as noted above, in his great philosophers listing, in spite of the fact that he connects Jesus back to Osiris, Malieth seems still to believe that Jesus was a real person?

Genius ranking
Malieth has a certain feel or sense for genius ranking and genius studies; the following being one example quote—numbers shown being those in current top 500 genius rankings:

Atheism studies
Malieth seems to have a well-honed grasped of atheists, atheism, and extreme atheism related topics of discourse, as evidenced by his philosophers section citation (above) of: Ludwig Feuerbach, Albert Camus, Soren Kierkegaard, etc.; the following is an example quote:

“Nietzsche is the supreme philosopher when it comes to the topic of morality. His critique of religion is easily the most comprehensive attack on religiosity of all time; therefore making him the greatest atheist that has ever lived. Epicurus is the first great atheist in history; Schopenhauer is the first modern atheist; and Nietzsche is the greatest atheist of all time. Albert Camus called Nietzsche the ‘most famous of God’s assassins’.”

Difficulties | Issues
The first main issue with Malieth’s work is his chapter “Plagiarism of Ancient Knowledge”, wherein he attempts to argue that all the world’s knowledge, e.g. discovery of pi, calculus, philosophy, law of conservation of energy, heliocentric theory, was plagiarized from the Egyptians, to a nauseating effect. While indeed, much of the world's present religious beliefs are based on Egyptian theology, and while Greek philosophers may have culled from aspects of mathematics and philosophy from the Egyptians, that, e.g., the Egyptians believed the sun was the century of the universe, goes against their entire edifice of geocentric (Geb-centric) belief system, anchored in the Heliopolis creation myth.

Other anachronism claims, e.g. the conservation of energy, are nearly nauseating to have to continually and repeatedly re-read.

The second main issue with his treatise, seemingly interesting superficially, being that its employs a ripe selection of name dropping, is that in the end, i.e. on the last page, his conclusion is that god equal nature and the “totality of reality is god”, which nearly is reverse to the message presented in the first one-third of the book.

Black genius | Issues
The most salient difficulty, amid Malieth's presentation, is the bend-over-backwards lengths he goes to attempt anchor everything in "black genius" issue. To quote one typical example:

“Black people are typically not given enough credit for contributing to humanity, but tell me this: how could Einstein have discovered the theory of relativity, without Riemann’s non-Euclidean geometry of higher dimensions, which evolved out of Euclid’s geometry that was taken back from ancient black Egyptians, who invented geometry to build those timeless pyramids.”

Writing like this is nauseating to the head. One might as well say that the “white Germans, who are smarter than the yellow Asians, owe their brains to the black Africans, who owe their brains to clever red East African rift valley monkeys, whose erudition derives from inquisitive green-blue aquatic explorers, who, in turn, derived from brown tuber worms, and so on.”

Malieth, here, does not seem to be aware of the “42˚ rule”, namely that the optimal latitude for genius development is 42 degrees latitude ±10˚, which is equivalent to the saying that you cannot make an ice cube in a fire, if one is too close to the equator, nor can you have frozen intelligent animation, if one is too close to the poles. [2] The following quote is anecdotal to this rule:


It is though he is trying to overcompensate from some type of racism insecurity, e.g. as evidenced by the way he refers to "ancient black Egyptians", in stead of normal citation method of referring to "ancient Egyptians" or simply Egyptians.

“It is unknown to people that ancient Egyptian religion is what eventually evolved into Judaism, Christianity, and Islam.”


“Christianity and Islam made it illegal and immoral to think for a long time, and that’s why philosophy and science slumbered for centuries. That fact is proven by the simple fact that I could not find a philosophy book at a bookstore when I visited Istanbul, Turkey. Turkey is now a Muslim nation so it’s hard to find books by philosophers out on display at libraries or bookstores.”

“Nietzsche called Schopenhauer his ‘great mystagogue’. In my opinion, Schopenhauer is the most underrated genius of all time and he could possibly be the wisest human to have yet taken a breath.”

“There is a tremendous disproportion in the division of wealth, power, freedom and knowledge among humans. That disproportion causes friction between nations, groups, and individuals; and that friction will sooner or later set societies ablaze.”