In terminology, moral compass is a conceptualized or theoretical inner guiding principle or inner sense of the mind, akin or analogous to the way a loadstone points north, helping to give sailors directions when at sea, or the iron of a compass needle points north—in alignment with the earth’s magnetic field—thought to distinguish right from wrong, good from evil, and or natural from unnatural, depending, albeit a more complex type of compass, being that the magnetic needle becomes the hydrocarbon mind of the human molecule, whereby choices resulting form the sense is guided, steered or pointed in seeming directions by a combination of the electromagnetic force and gravitational force, rather than solely by the magnetic force, in the case of iron. [1]

Etymology
In 1824, English anon author, a self-defined deist, in Essays on the Universal Analogy between the Natural and Spiritual World, seems to have been the first to employ the term “moral compass”, specifically in his essay “Parallel between Magnetism and Electricity, Natural and Spiritual”, wherein he states the following: [2]

“Third question: ‘Doth any one in handling similitude and diversity assign the cause, why iron should not move to iron, which is more like, but move to the loadstone, which is less like.’ In opening this question I would put another question to the enquirer, and say, why does the convinced (though not yet converted) sinner not move to the open unconvinced sinner, who is apparently more like, but to the saint, or to the book, or to the preacher, the instrument of his conviction, who is apparently less like? If I can show that the natural iron and loadstone are symbols of the above moral cases and things, I presume that the reader will then understand the meaning at once.

In fact, I have written an essay on moral magnetism in comparison with the natural; and I find that all the cases in the natural, are strict symbols of those in the moral scale; they are all exact parallels. Yet I cannot prove my assertions in few words or lines, so I will only say briefly, that the loadstone or magnet is a magnetizer or teacher. He possesses the magnetic fluid of reason and truth. The pure iron is his docile and non pre-occupied pupil: while the iron is unmagnetized by the spirit of the loadstone, it is not attracted by it; but so soon as the spirit of the master is imbibed by the pupil, he also becomes magnetized by reason and true proportion; he is then attracted by the spirit of his master. He also has polarity; that is to say, he is competent to distinguish good and evil, and social from self-love; or south from north.

He perceives that the centre between these two extremes or poles, is this divine truth, ‘thou shalt love thy neighbour as thyself.’ He then sees that the meridian of his moral compass from east to west is the true line of religion, at right angles to that of morality. He will not then move to the unmagnetic iron, by the attraction of sympathy, but only by the impulsion of charity, to teach as he was taught; but he will move by attraction towards the moral magnet whom he resembles in spirit, but not yet in form.

I would add, that the moral or human magnets are positive by true religion, and negative by false religion; but they both operate similarly, though inversely. For instance, the apostles and prophets of our Lord are positive magnets; and those of Satan, such as the teachers of blasphemy, sedition, and all wickedness, are negative.” 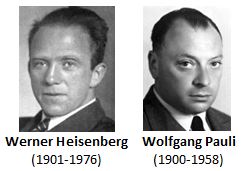 One summer night, Wolfgang Pauli and Werner Heisenberg, following a Copenhagen meeting on quantum mechanics (with Niels Bohr), entered into a dialogue on god and soul, wherein, as recounted by Heisenberg (below), Heisenberg stated frankly that the main issue (or tension) is that we don’t yet have a gravito-electromagnetic force based "moral compass", the way sailors do for directional guidance in the earth’s magnetic force:

Wolfgang: “Do you believe in a personal God? I know, of course, how difficult it is to attach a clear meaning to this question, but you can probably appreciate its general purport.”

Heisenberg: “May I rephrase your question?” “I myself should prefer the following formulation: can you, or anyone else, reach the central order of things or events, whose existence seems beyond doubt, as directly as you can reach the soul of another human being? I am using the term ‘soul’ quite deliberately so as not to be misunderstood. If you put your question like that, I would say yes. And because my own experiences do not matter so much, I might go on to remind you of Pascal’s famous text, the one he kept sewn in his jacket. It was headed “Fire” and began with the words: “God of Abraham, Isaac and Jacob – not of the philosophers and sages.” “In other words, you think that you can become aware of the central order with the same intensity as of the soul of another person?”

Wolfgang: “Perhaps.” “Why did you use the word ‘soul’ and not simply speak of another person?”

Heisenberg: “Precisely because the word, ‘soul’, refers to the central order, to the inner core of a being whose outer manifestations may be highly diverse and pass our understanding.

Heisenberg: “If the magnetic force that has guided this particular compass – and what else was its source but the central order – should ever become extinguished, terrible things may happen to mankind, far more terrible even than concentration camps and atom bombs. But we did not set out to look into such dark recesses; let’s hope the central realm will light our way again, perhaps in quite unsuspected ways. As far as science is concerned, however, Niels is certainly right to underwrite the demands of pragmatists and positivists for meticulous attention to detail and for semantic clarity. It is only in respect to its taboos that we can object to positivism, for if we may no longer speak or even think about the wider connections, we are without a compass and hence in danger of losing our way.”

“A moral compass is a little thing inside us, like a compass, that tells us the right direction—when we have to make decisions—from wrong direction.”

“Do you have your own moral compass? If so, which direction is it leading you?”

“I was always an unusual girl. My mother told me I had a chameleon soul, no moral compass pointing due north, no fixed personality; just an inner indecisiveness that was as wide and as wavering as the ocean.”