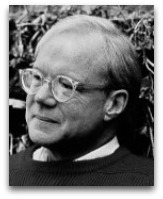 In hmolscience, Morgan Scott Peck (1936-2005), known commonly as M. Scott Peck, was an American psychiatrist noted, in religious thermodynamics, for his 1978 The Road Less Traveled, where in he speculates on entropy, sin, evolution, and what seems to be general meaning, leaning towards theology.

Overview
In 1978, Peck, in his The Road Less Traveled, a listing of attributes that make for a fulfilled human being, with sections on the “miracle of evolution”, where he points out evolution runs counter to the second law of thermodynamics, “entropy and the original sin”, and the “problem of evil”, among others, speculating on how thermodynamics relates aspects of human activity and spiritual evolution. [1] As to laziness, for example, Peck argues that this is the action of the force of entropy. The following is a noted quote: [2]

In using the term "physical evolution", Peck meant to differentiate between the evolution of the body and "spiritual evolution", both of which, as diagrammed by his two entropy triangles (below), are governed or acted on by the force of entropy, in his view:

Curiously, in a footnote to this presentation, Peck states: “the concept that evolution runs counter to natural law is neither new nor original. I seem to remember someone I studied in my college days [1950s] stating, ‘Evolution is an eddy in the second law of thermodynamics,” but I have unfortunately not been able to locate the reference. More recently the concept has been articulated by Buckminster Fuller in his book And it Came to Pass—Not to Stay (New York: Macmillan, 1976).” This quote, to note, does seem to be difficult to track down; a number of similar quotes date to the 1950s. It could trace to the 1940 book Man on His Nature by English physiologist Charles Sherrington, who discussed the second law, life, entropy, and eddies of energy. [4]

Education
Peck graduated from Friends Seminary in 1954, after which he received a B.A. from Harvard in 1958 and an M.D. degree from Case Western Reserve University in 1963.