In religio-mythology, morning sun, or “morning sun god”, as compared to “noon sun” (noon sun god) or “evening sun” (evening sun god), refers to the sun conceptualized as a sun god, generally Khepri, Ra synretized to Khepri as "Ra-Khepri", or Horus, as the newly born sun early in the day, who grows strong by noon, conceptually dying at each night, like an old man, so to say.

Khepri
The following shows the flying scarab beetle god Khepri as Ra or "Ra-Khepri", i.e. the dung beetle, or the "morning sun":

As dung beetles had the ability to fly, and also hatched their young in round "sun-shaped" dung balls, which they rolled along the ground, to put into their nesting holes, they were seen to embody the new day's sun, "flown" into the sky do to say.

Horus the Younger
The following shows Horus as a child as a form of the morning sun, conceptualized as a baby or child: 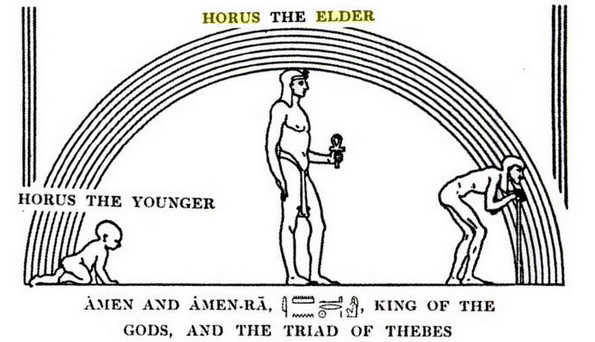 As Horus, considered the oldest god of all, was conceptualized as being a falcon or a falcon caring the sun disc or sun ball on its head, was able to fly, he was considered or associated with being the "morning sun", similar to the bennu bird (aka phoenix). [1]