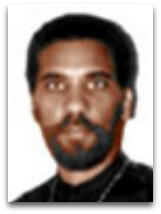 Genesis
Ashby, in his Anunian Theology (pgs. 51-52) makes some crude connections between Genesis and the Egyptian Ptah, Atum, Ra, Nun version of creation, and these with Hindu creation models; to quote one section:

“Egyptian mythology begins with the existence of the Nu, the primeval ocean. The creation stories of the Bible, the Kabbalah (Jewish mysticism), and the Upanishads (Indian mysticism) are remarkably similar in the notion of the original primeval formless void and in the subsequent names and forms (matter differentiation and objectification) which arise later.”

Pa | Ma
Ashby alludes to the assertion that “Pa”, as in Papa (father), has its etymological roots in the Egyptian Pa Neter (see: neter) or “high god”, and that “Ma”, as in Mama (mother) has its etymological roots in the order goddess Maat, to the effect that Ra created the universe by putting the Maat in place of chaos; Maat is akin to “universal mother” or “mother nature”, or thereabouts. [2]

Overview
In 1997, Ashby, in his Anunian Theology: African Religion, attempted to outline what he called the spiritual philosophy (philosophy based on spirit) of ancient Africa, which he says originated in the “kamitan religion” (religions of the Kemites, i.e. Egyptians), aka Ra religion (theology based on the god Ra), Anunian theology (theology based on the god Nun), Neterianism (the Egyptian word for god is ‘neter’ represented by the axe symbol), a belief system he says originated, in pre-dynastic times, in the great lakes region of the Ethiopian mountains. [1]

Education
Ashby competed a PhD in religious studies, has a doctor of divinity degree in holistic health, and whose research with a focused on the Egyptian origins of Indian yoga practices.

“We have established that the Ancient Egyptians were African peoples who lived in the north-eastern quadrant of the continent of Africa. They were descendants of the Nubians, who had themselves originated from farther south into the heart of Africa at the Great Lakes region, the sources of the Nile River. They created a vast civilization and culture earlier than any other society in known history and organized a nation that was based on the concepts of balance and order as well as spiritual enlightenment. These ancient African people called their land Kamit, and soon after developing a well-ordered society, they began to realize that the world is full of wonders, but also that life is fleeting, and that there must be something more to human existence.”