Overview
In c.710, Bede, supposedly (Ѻ) influenced by John of Damascus, is said to have written about Muhammad.

Religio-mythology
In 1923, Ameer Ali, in his A Critical Examination of the Life and Teachings of Mohammad, made some loose connections between the newly-formed Islam and Egyptian mythology, e.g. Osiris. [7]

In 2006, Natan Yoel, in his Moon-o-theism, citing Ali, cited Plutarch (c.110AD) as referring to Osiris as a moon god, then cites Budge:

“Osiris-Aah, i.e. Osiris the moon god, appears in the form of a human-headed mummy, with a crescent-moon and full moon on his head. In his hands he holds symbols of stability, life, serenity, power and dominion.” 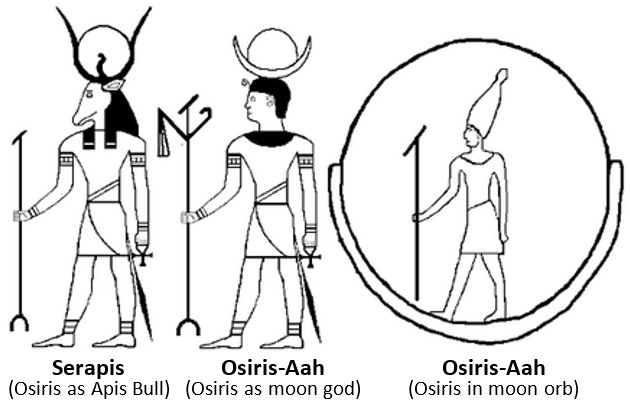 Yoel then concluded as follows:

“Muhammad thought of Christian Trinity, not as ‘father’, ‘son’, and ‘spirit’, but as a triad of father Osiris, sun Horus, and mother Isis.”

In 2012, Brett Stortroen, in his Mecca, Muhammad & the Moon-god: a Candid Investigation into the Origins of Islam, argued that the Quran was constructed as follows:

“Ancient Arabian folklore with its stone and astral cults, shamanism, various Judaic traditions, heretical sects within Christianity, and prevalent moon-god veneration, were all rolled together into a kind of salad religion, taking bits and pieces [from surrounding religions].”

In 1239, Frederick II published a treatise that denied the divinity of Jesus, Moses, and Muhammad, declaring each of them imposters, but conducted experiments to test the truths of various religious models, e.g. that Adam and Eve were the first two humans (language deprivation experiments) and soul detection experiments.

In 1930, Soviet Marxist theoretician Liutsian I. Klimovich, in his lecture “Did Muhammad Exist?”, argued the time gap between Muhammad’s alleged lifetime and the first written sources was so huge that we cannot suppose that any of the information given in these sources is authentic; that nothing is known for sure about the historical Muhammad, and that it is even likely that he never existed. Quite consequently, Klimovich assumed that the Koran was not Muhammad’s work but the product of a whole group of authors. Muhammad was created by later historians as a myth, designed to explain the emergence of the Islamic community out of the Hanif movement. The prophet was an invention to cover up early Islam’s character as a social protest movement. [4]

In 2003, Walter Williams, in his The Historical Origin of Islam, asserted that Muhammad is the brainchild of Arabian scholar Ibn Arabi (1165-1240) (Ѻ) who was the main individual involved in the morphing and mythologizing (Ѻ) of the making of the prophet Muhammad; he also shows that the the Koran is a mixture of Jewish literature, put together by Jewish scholars to include the Torah and the New Testament Gospels. [6]

In 2008, German jurist and former Islamic theologian Sven Kalisch, whose doctoral thesis (1997) was on “common sense and flexibility in Islamic legal methodology” (see also: Goethe's jurisprudence issues and student reactions), completed at the Faculty of Law and Economics at the Technical University of Darmstadt—a Protestant-to-Muslim convert (age 15) turned Muslim-to-nonbeliever convert (age 44)—made controversial headlines by stating, in an article entitled “Islamic Theology Without the Historic Muhammad: Comments on the Challenges of the Historical-Critical Method for Islamic Thinking”, his researched opinion that Muhammad never existed; at the time, he was said to be in the middle of completing a book on this subject. [1]

In 2011, Hans Jansen, in his “The Historicity of Muhammad, Aisha and Who Knows Who Else”, argued the position that Muhammad is a fictional character. [3]

In 2012, Robert Spencer, founder (Ѻ) of JihadWatch.org (Ѻ), in his Did Muhammad Exist?: An Inquiry into Islam's Obscure Origins, asserted, per reason that there is no mention of a person named "Muhammad" in Arab literature until 692, a full sixty years (Ѻ) AFTER the purported death of Muhammad in 632, that what is Islamic revelation was an afterthought, a narrative created after the Arab conquests of the Near East, to give the new ruling elite an ideological pretext for power. [2]

“Muhammad’s own presuppositions and systems show that religious traditions are not trustworthy. The Jews and Christians say that Jesus really died, but the Quran [Surah 4:157] contradicts them.”

“Frederick II, this pestilent king, a scorpion spitting out poison from the stinger of his tail, has notably and openly stated that—in his own words—the whole world has been fooled by three imposters, Jesus Christ, Moses, and Muhammad, two of whom died honorably, while Jesus himself died on the cross. Moreover, he has dared to affirm, or rather, he has fraudulently claimed, that all those who believe that a virgin could give birth to the god who created nature, and all the rest, were fools. And Fredrick has aggravated the heresy by this insane assertion, according to which no one can be born without having been conceived by the prior intercourse of a man and woman; he also claims that people ought to believe nothing that cannot be proven by the strength and reason of nature.”

“It may sound crazy but it is not as crazy as it sounds: a number of scholars consequently suspect that Muhammad is not a historical figure, but a literary character that was created by ancient Arab storytellers, perhaps early in the eighth century of our era.”