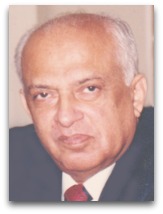 Beg
In 1953, Mirza Beg completed his BS in chemistry at D.J. College, Pakistan, where he studied, in some sense, under Kazi, or as Kazi later said "Beg was one time my student." [1]

In 1987, Kazi penned a three-page “Foreword by a Scientist” section to Beg’s New Dimensions in Sociology. [1]

Education
In c.1950, Kazi completed his MS at D.J. College, Karachi, and in 1955 completed his PhD in organic chemistry at Kings College, London, after which he became a faculty member at the University of Sindh, Pakistan. From 1977 to 1990, Kazi was the president of the Chemical Society of Pakistan.

Quotes | By
The following are quotes by Kazi:

“Man's observations of natural phenomena have fascinated him throughout the recorded history and have provided him a base for development of theoretical ideas. He has sought similarities occurring in two different systems, the social and the natural, and has attempted to derive corollaries in support of his theories. The interpretation of the atomic structure in terms of the solar system by Bohr the structure of benzene as a ring on the basis of a model of a snake with its tail in the mouth postulated by Kekule and the determination of density by the loss of weight of a body on its immersion in water, attempted by Archimedes are some such examples where the latter set of observations were superimposed on the former system to arrive at an acceptable solution of complex phenomena. The book New Dimensions in Sociology, A Physico-Chemical Approach to Human Behaviour by Mirza Beg is a new approach in which he has tried to establish an interface between physico-chemical and social sciences. It makes an interesting reading and provides a basis to quite a few socialization processes like assimilation, migration, mind-body split, etc.”

“The author has suggested a universality of phenomena, the attraction and repulsive forces at atomic and molecular level, micro-cosmic and macro-cosmic level and among celestial bodies to be operative also among human beings which are an integral part of the universe and that similar forces should govern their interaction or behaviour.”

“The strength of a society is explained [by Beg] in terms of molecular association and dissociation for life seems to be ultimately molecular.”