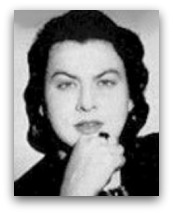 In thermodynamics, Muriel Rukeyser (1913-1980) was an American feminist poet noted for her detailed 1942 biography on American engineer Willard Gibbs. [1]

Gibbs | Poem
In the 1930s, Rukeyser became fascinated by Willard Gibbs, particularly inspired by his famous "mathematics is a language" quip; sometime therein she wrote a long poem about his life and work entitled "Gibbs", included in her collected works set A Turning Wind (1939), which is as follows: [2]

It was much later in his life he rose
in the professors’ room, the frail bones rising
among that fume of mathematical meaning,
symbols, the language of symbols, literature . . . threw
air, simple life, in the dead lungs of their meeting,
said, “Mathematics is a language.”
Withdrew. Into a silent world beyond New Haven,
the street-fights gone, the long youth of undergraduate
riots down Church Street, initiation violence,
secret societies gone : a broken-glass isolation,
bottles smashed flat, windows out, street-fronts broken : to quiet,
the little portico, wrought-iron and shutters’ house.
A usable town, a usable tradition.
In our war or politics.

Not science.
Withdrew.
Civil War generates, but
Not here. Tutors Latin after his doctorate
when all of Yale is disappearing south.
There is no disorganization, for there is no passion.
Condense, he is thinking. Concentrate, restrict.
This is the state permits the whole to stand,
the whole which is simpler than any of its parts.
And the mortars fired, the tent-lines, lines of trains,
earthworks, breastworks of war, field-hospitals,

Whitman forever saying, “Identify.”
Gibbs saying
“I wish to know systems.”
To be in this work. Prepare an apocryphal
cool life in which nothing is not discovery
and all is given, levelly, after clearest
most disciplined research.

The German years
of voyage, calmer than Kant in Koenigsberg, to states
where laws are passed and truth’s a daylight gift.
Return to a house inheriting Julia’s keys,
sister receiving all the gifts of the world,
white papers on your desk.
Spiritual gift
she never took.

Books of discovery,
haunted by steam, ghost of the disembodied engine,
industrialists in their imperious designs
made flower an age to be driven far by this
serene impartial acumen.

Years of driving
his sister’s coach in the city, knowing the
rose of direction loosing its petals down
atoms and galaxies. Diffusion’s absolute.
Phases of matter! The shouldering horses pass
turnings (snow, water, steam) echoing plotted curves,
statues of diagrams, the forms of schemes
to stand white on a table, real as phase,
or as the mountainous summer curves when he
under New Hampshire lay while shouldering night
came down upon him then with all its stars.
Gearing that power-spire to the wide air.
Exacting symbols of rediscovered worlds.
Through evening New Haven drove. The yellow window
of Sloane Lab all night shone.
Shining an image whole, as a streak of brightness
bland on the quartz, light-blade on Iceland spar
doubled! and the refraction carrying fresh clews.
Withdrew.

It will be an age of experiment,
or mysticism, anyway vastest assumption.
He makes no experiments. Impregnable retires.
Anyone having these desires will make these researches.
Laws are the gifts of their systems, and the man
in constant tension of experience drives
moments of coexistence into light.
It is the constitution of matter I must touch.
Deduction from deduction : entropy,
heat flowing down a gradient of nature,
perpetual glacier driving down the side
of the known world in an equilibrium tending
to uniformity, the single dream.

He binds
himself to know the public life of systems.
Look through the wounds of law
at the composite face of the world.
If Scott had known,
he would not die at the Pole, he would have been
saved, and again saved—here, gifts from overseas,
and grapes in January past Faustus’ grasp.
Austerity, continence, veracity, the full truth flowing
not out from the beginning and the base,
but from accords of components whose end is truth.
Thought resting on these laws enough becomes
an image of the world, restraint among
breaks manacles, breaks the known life before
Gibbs’ pale and steady eyes.
He knew the composite
many-dimensioned spirit, the phases of its face,
found the tremendous level of the world,
Energy : Constant, but entropy, the spending,
tends toward a maximum—a “mixed-up-ness,”
and in this end of levels to which we drive
in isolation, to which all systems tend,
Withdraw, he said clearly.
The soul says to the self : I will withdraw,
the self saying to the soul : I will withdraw,
and soon they are asleep together
spiralling through one dream.
Withdrew, but in
his eager imperfect timidities, rose and dared
sever waterspouts, bring the great changing world
time makes more random, into its unity.

“Willard Gibbs is the type of the imagination at work in the world. His story is that of an opening up which has had its effect on our lives and our thinking; and, it seems to me, it is the emblem of the naked imagination—which is called abstract and impractical, but whose discoveries can be used by anyone who is interested, in whatever "field"—an imagination which for me, more than that of any other figure in American thought, any poet, or political, or religious figure, stands for imagination at its essential points.”

Gibbs's nephew, Ralph Gibbs Van Name, a professor of physical chemistry at Yale, was unhappy with Rukeyser's biography, in part because of her lack of scientific training. Van Name had withheld the family papers from her and, after her book was published in 1942 to positive literary but mixed scientific reviews, he tried to encourage Gibbs's former students to produce a new and more technically oriented biography. [4] With his support, Lynde Wheeler published such a work in 1951. [5]