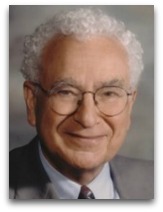 In existographies, Murray Gell-Mann (1929-2019) (IQ:#|#) (Simmons 100:45) (CR:22) was an American physicist, a semi-ranked greatest physicist ever, a 2014 SPE (#3|25), known generally for the eight-fold way classification of particle physics, understood by a new field of physics he called "quantum chromodynamics", in parallel to quantum electrodynamics, noted for his coining of "quantum flapdoodle" for people who used quantum mechanics incorrectly to argue for nonsense. [1]

Eight-fold way
In Dec 1960, Gell-Mann, following a conversation with mathematician Richard Block, about Lie group theory, saw that elementary particles could be ordered into a scheme he called the “eight-fold way”, akin to Dmitri Mendeleyev and the periodic table, for the chemical elements.

At age 10, Gell-Mann read James Joyce’s notoriously obscure masterpiece Finnegan’s Wake (Ѻ); and in 1963 naming the "quark", the fundamental constituents of the nucleon (protons and neutrons), after a passage in the book.

In 1948, Gell-Mann, aged 19, was accepted into the graduate program of MIT and Harvard, but was seriously contemplating suicide (Ѻ), because he was turned down by Yale and Princeton, and considered MIT to be kind of “grubby”; in the end, he decided that he could try MIT and then commit suicide after, if it didn’t work out.

Sante Fe Institute
In 1980s, Gell-Mann, bored with physics, having done, in his mind, his share of ground-breaking work, decided to venture into complexity theory, animals, and communication, and therein founded the Santa Fe Institute; this is summarized as follows:

“In 1980, just after Murray had turned 50, Margaret was diagnosed with cancer, and she died the following year. He became depressed: he had already won the Nobel prize and most other prizes and honors in physics, so he now turned to new fields to conquer. From his childhood onwards he had been interested in birds, nature and sustainability. He had long wanted to apply the mathematical principles of theoretical physics to other fields, especially those that dealt with biological phenomena. He was fascinated by language and its origins. Murray thought that future scientific development would involve the study of really complex phenomena: physics was not simple, but the origins of language or cognitive development were of a different order of complexity. With his wealth of contacts, he set about obtaining funds for the Santa Fe Institute, situated in the hills overlooking Santa Fe, which would study such problems. He left Caltech for the Santa Fe Institute in 1993 and settled in the city.”

Life | Emergence + Accidents?
In 2007, Gell-Mann, in his TED talk “Beauty and Truth in Physics”, told people that he believed that life was the result of emergent properties plus lots of accidents:

Quotes | On
The following are Gell-Mann related quotes:

“I wonder what IQs some of the following would have: Edward Witten [1951-], Murray Gell-Mann, Richard Garwin [1928-], Marvin Minsky [1927-], Grigori Perelman [1966-], Saul Kripke [1940-], and Erik Demaine [1981-]. From years past who are no longer alive I would have likes to know what Kurt Godel's or Herbert Simon (one of the founders of AI as well as having a Nobel Prize in economics as well as the Turing award which can be thought of as the equivalent award for computer science), Gauss, Euler and many more listed already on this page but only as estimates.”

“Any listing of the 30+ smartest people ever without Murray Gell-Mann and John von Neumann is dubious at best.”

“Here’s my personal list for the title of greatest American physicist in history, in no particular order: Joseph Henry, Willard Gibbs, Albert Michelson, Robert Millikan, Robert Oppenheimer, Richard Feynman, Murray Gell-Mann, Julian Schwinger, Ernest Lawrence, Edward Witten [1951-], John Bardeen, John Slater, John Wheeler and Steven Weinberg. This list pales in comparison with an equivalent list of European physicists which would include names like Einstein, Dirac, Rutherford, Bohr, Pauli and Heisenberg; and this is just if we include twentieth-century physicists.”

“Modern physics is governed by that magnificent and thoroughly confusing discipline called quantum mechanics that has survived all tests, is believed to be flawless, but one that nobody understands.”