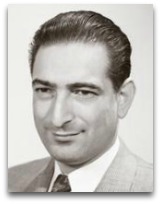 In thermodynamics, Myron T. Tribus (1921-) is an American engineer and thermodynamicist, associated with the MIT school and co-founder of the MaxEnt school of thermodynamics, note for the coining of the term “thermoeconomics” (1962)—albeit in the context of the economic considerations for converting sea water into fresh water—for his work in thermostatics, and for his studies in information theory thermodynamics.

Education
In 1941, Tribus, as an undergraduate chemistry student, learned thermodynamics and statistical mechanics from Canadian-born American chemist William Giauque, of the Lewis school of thermodynamics. [1] Tribus completed his PhD in 1948 from UCLA soon thereafter began teaching courses on thermodynamics, fluid mechanics, and heat transfer at UCLA.

“Neither I nor my committee knew the answer. I was not at all satisfied with the answer I gave. That was in 1948 and I continued to fret about it for the next ten years. I read everything I could find that promised to explain the connection between the entropy of Clausius and the entropy of Shannon. I got nowhere. I felt in my bones there had to be a connection; I couldn’t see it.”

Tribus goes on to state that one day in 1958 a student of his named Zyssimo Typaldos (c.1930-c.1995) replied to his question about the connection between Shannon and Clausius by saying: “Oh, that’s already been solved.” Typalodos referred Tribus to American physicist Edwin Jaynes’ his two part 1957 paper “Information Theory and Statistical Thermodynamics” in which Jaynes attempts to derive a statistical thermodynamics interpretation of information theory. [2] Tribus obtained a copy the next day. He comments:

“Here was my Rosetta Stone! I went home and worked with that paper for a week, almost without sleep. All of my studies for a decade suddenly fell in place. A straight forward connection between Shannon’s entropy and the entropy of Clausius poured into the paper, almost without my hand.”

Next he found out that Jaynes was at Stanford:

“I took an overnight train and showed up in his office, the next morning, surely acting like a crazed man. I remember going to the blackboard in his office and pouring out the derivation of the laws of thermodynamics.”

In 1959, Tribus invited Jaynes to come to UCLA to participate in a two week summer course on information theory and thermodynamics, during which time Tribus learned that Jaynes had been preparing material for a book on probability and its applications; the taught the course together. Although Jaynes never completed his book, Tribus did writing his 1961 Thermostatics and Thermodynamics: an Introduction to Energy, Information and States of Matter, based, as he says, “squarely on Ed’s work”; the fundamental ideas in this book taken directly from Jaynes’ work, which was never published. [6]

Tribus could only cite Jaynes’ work as “in print”. Tribus' book was the first book publication to attempt to base the laws of thermodynamics on information theory rather than on the classical arguments.

Shannon meeting
In April 1961, Tribus gave a seminar at MIT on a new way to derive thermodynamics based on information theory. He states that a critical audience, comprised of students of American mechanical engineer Joseph Keenan, founder of the MIT school of thermodynamics, “tried to rip it apart”. Moreover, French mathematician Benoit Mandelbrot was in the audience and quickly attacked the MaxEnt interpretation, saying:

“Everyone knows that Shannon’s derivation is in error.”

Beyond this, it happened that Shannon was in residence at MIT that week, so Tribus went to see him. Shannon, according to Tribus, “was immediately able to dispel Mandelbrot’s criticism, but went on to lecture me on his misgivings about using his definition of entropy for applications beyond communication channels.” [1] During this meeting, Tribus queried Shannon as to his reason for choosing to call his information function by the name ‘entropy’, the details of which were first made public in Tribus' 1971 article “Energy and Information”, wherein he states: [4]

“What’s in a name? In the case of Shannon’s measure the naming was not accidental. In 1961 one of us (Tribus) asked Shannon what he had thought about when he had finally confirmed his famous measure. Shannon replied: ‘My greatest concern was what to call it. I thought of calling it ‘information’, but the word was overly used, so I decided to call it ‘uncertainty’. When I discussed it with John von Neumann, he had a better idea. Von Neumann told me, ‘You should call it entropy, for two reasons. In the first place you uncertainty function has been used in statistical mechanics under that name. In the second place, and more importantly, no one knows what entropy really is, so in a debate you will always have the advantage.”

Tribus, in his 1987 article “An Engineer Looks at Bayles”, recounts his discussion with Shannon on this question as follows: [5]

“The same function appears in statistical mechanics and, on the advice of John von Neumann, Claude Shannon called it ‘entropy’. I talked with Dr. Shannon once about this, asking him why he had called his function by a name that was already in use in another field. I said that it was bound to cause some confusion between the theory of information and thermodynamics. He said that Von Neumann had told him: ‘No one really understands entropy. Therefore, if you know what you mean by it and you use it when you are in an argument, you will win every time.”

Other
From 1961 to 1969 he was dean of the school of engineering at Dartmouth College. From 1974 to 1986 he directed the Center for Advanced Engineering Study at MIT. Tribus is co-founder of Exergy Inc., a company modeled on the principle of exergy, specializing in the design of high-efficiency power production systems.

“After my book on Thermodynamics appeared, I sat back and waited for the call from the Nobel Committee. They never wrote. But other people did writer and it was not at all what I wanted to hear. My attempts at getting engineering professors to adopt a new way to look at thermodynamics was a complete failure. Not only that, but I was attacked as someone who had taken intellectual shortcuts. Once, during a presentation at IIT in Chicago, I showed how Ed Jaynes’ methods developed, in four lines, the equations of the Fowler and Guggenheim required hundreds of pages to reach. Now once did we mention ergodicity. The presentation did not convince most of the audience. Their reaction: Surely we had cheated somewhere.”