In terminology, mythology (TR=171) is the study of myths or allegorical narratives, often dealing with God, gods, demigods, and or legendary heroes or stories, or admixtures thereof, of a particular people, or of popular beliefs or assumptions that have grown up around someone, something, or some phenomena.

Jefferson
The following quote(Ѻ) by Thomas Jefferson on religion as fables and mythologies, shown in a 2011 fence-protected holiday display, made by Atheists United, in Santa Monica, California: 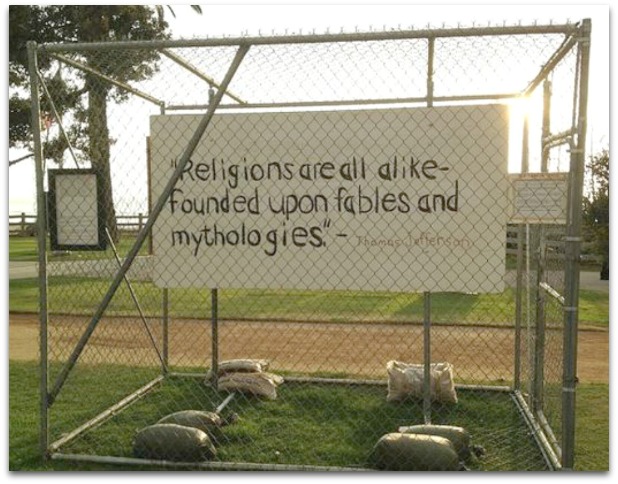 “It is impossible for anyone to dispel his fear over the most important matters, if he does not know what is the nature of the universe, but instead suspects something that happens in myth. Therefore, it is impossible to obtain unmitigated pleasure without natural science.”

References
1. Stenger, Victor J. (2013). God and the Atom: From Democritus to the Higgs Boson: the Story of a Triumphant Idea (pg. 11). Prometheus Books.