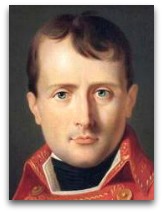 See main: Napoleon on the soul

The following are quotes by Napoleon on the soul:

“Laplace made a detestable Minister of the Interior [under the Directory]. His great friend was Lagrange, and he never dared to speak in the Institute without consulting him. If Lacroix or others attacked him, Lagrange thundered down upon them. I often asked Laplace what he thought of god. He owned he was an atheist. Many crimes have been committed in the name of religion. The oldest religion is the worship of the sun. Where is the soul of an infant? I cannot remember what I was before I was born; and what will become of my soul after my death? As to my body, it will become carrots or turnips. I have no dread of death. In the army I have seen many men suddenly perish who were talking with me.”

“Herodotus tells us that in his day the slime of the Nile changed into rats, and that they might be seen in process of formation. Can any one tell us what the brain is? All things can be explained by magnetism. Where is little Arthur Bertrand's (Ѻ) soul? The soul is formed as the body forms. Knock a nail into your head, then you become a madman, and then where is your soul? It is absurd to believe that at the Last Judgment we must appear in the flesh. Why should we, for a few crimes committed upon earth, be punished eternally?”

“When I see that a dog or a pig has a stomach and can eat, I say to myself, ‘I have a soul, they must have one too’. Give my watch to a savage and he will think it has a soul.”

“A soul? Give my watch to a savage, and he will think it has a soul. If I have a soul, then pigs and dogs also have a soul?”

Napoleon also to to a certain extent was a soul theorist, e.g. querying physicians about having ever seen the "soul" during their dissections of the brain, and also himself conducting experiments with plants to discern the possible location of the soul, or something along these lines.

Napoleon was a famous agnostic leaning towards atheism. From 1804 to 1815, Napoleon notably went around polling of the leading scientists of France on their religious views, e.g. Pierre Laplace (see: Napoleon Laplace anecdote). from which he discerned was atheism, in large part. The following are noted Napoleon statements made in dialogue with Gaspard Gourgaud in 1817:

“I have dictated thirty pages on the world's three religions; and I have read the Bible. My own opinion is made up. I do not think Jesus Christ ever existed. I would believe in the Christian religion if it dated from the beginning of the world. That Socrates, Plato, the Mohammedan, and all the English should be damned is too absurd. Jesus was probably put to death, like many other fanatics who proclaimed themselves to be prophets or the expected Messiah. Every year there were many of these men.”

“I once found at Milan an original manuscript of the 'Wars of the Jews,' in which Jesus is not mentioned. The Pope pressed me to give him this manuscript. What is certain is, that in the days of Jesus public opinion favored the worship of One God, and those who first preached that doctrine were well received and welcomed. It would have been so in my own case if from the lowest ranks of society I had become Emperor. It would have been because circumstances and public opinion were for me, not against me.”

“I read the Bible. Moses was an able man. The Jews were a cowardly and cruel people.”

“I think that man was formed by the action of the heat of the sun upon the mud.”

“Say what you like, but everything is more or less organized matter. When I have had stags cut open in hunting, I saw that their interior was like that of man. Man is only a more perfect being than dogs and trees. Plants are the first link in the chain of which man is the last. I know this is contrary to religion, but it is my opinion. We are all matter. Man was created by a certain warmth in the atmosphere. Man is young, and the earth is old. The human race has not existed more than six or seven thousand years, and thousands of years from now man may be very different from what he has been. Science may then have made such progress that mankind may perhaps have found out how to live forever. Agricultural chemistry is yet in its infancy. Not many hundred years ago we found out extraordinary properties in certain bodies, but we cannot explain them—the loadstone, electricity, and galvanism. What discoveries may not be made in these thousands of years!”

“If a man can think, it is because his nature is more perfect than that of a fish. When my digestion is bad, I think differently from what I do when I feel well. Everything depends on matter. If I had believed in a God who punished or rewarded us according to our deeds, I might have lost courage in battle.”

“Science, which has disproved that the earth is the center of the celestial system, struck a great blow at religion. Joshua, we are told, stayed the sun, and that stars will fall into the sea from heaven. What do I say? All the suns, and all the planets, etc.”

“A man cannot become an atheist merely by wishing it.”

“If I had to choose a religion, the sun as the universal giver of life would be my god.”

“It remains an open question whether Christ ever lived.”

“Everything is more or less organized matte. To think so is against religion, but I think so just the same.”

Napoleon was a great fan of Goethe, having had read Werther, supposedly, six times during battle. [1]

On 6 Aug 1806, news reached Goethe of the formal dissolution of the Holy Roman Empire; by Oct, war had come to Jena. During the chaos, on 14 Oct, drunken French troops, bent on looting, force their way into Goethe’s house, whereupon Christiane Vulpius (1765-1816) boldly confronted (see: Goethe timeline) them and declared that “a friend of Napoleon” lived here—the house was spared, and five days later, on 19 October Goethe made Christiane his wife; their sixteen year old son August present as one of the witnesses.

In 2 Oct 1808, Goethe famously met Napoleon. [1] Napoleon's famous greeting of the author Werther on 2 October, was" «Voilà un homme!» (‘Now here is a real man!'). After meeting with Beethoven, four years later, Goethe famous commented something along the lines of how he admired the former, but despised (?) the latter, or there to this affect.

Napoleon being an agnostic irreligionist most of his existence, in his last three weeks, professed belief in god:

“I am neither atheist nor a rationalist; I believe in god and am of the religion of my father. I was born Catholic, and will fulfill all the duties of the church.”

Curiously, here we see some sort of Pascal’s wager like fear creeping into his mind, at the last moment?

Quotes | On
The following are quotes on Bonaparte:

“The Emperor dictated a note to me, to prove that the water struck out of a rock by Moses could not have quenched the thirst of two millions of Israelites.”

Quotes | By
The following are quotes by Napoleon:

“Destiny urges me to a goal of which I am ignorant. Until that goal is attained I am invulnerable, unassailable. When destiny has accomplished her purpose in me, a fly may suffice to destroy me.”

“History is a set of agreed-upon lies.”

“Great ambition is the passion of a great character. Those endowed with it may perform very good or very bad acts. All depends on the principles which direct them.”

“Men are moved by two levers only: fear and self interest.”

“Great men are meteors that burn so that the earth may be lighted.”

“Nothing is more difficult, and therefore more precious, than to be able to decide.”

“Public opinion is the thermometer a monarch should constantly consult.”

“Take time to deliberate, but when the time for action has arrived, stop thinking and go in.”

“There is no such thing as accident; it is fate misnamed.”