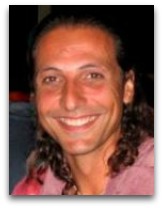 In human physics, Nassim Haramein (1962-) is a Swiss-born American new age theoretical physicist noted for his 2004 “spacetime torque” model of stellar movement, developed in coordination with American nuclear physicist and engineer Elizabeth Rauscher, which is based on the inclusion of torque and Coriolis force terms in Einstein’s field equations to formulate a universal model of “spin”. [1] On this basis, in contrast to the big bang model, he outlines a torus shaped infinite universe model, in a way that everything is connected, humans included.

Spirituality | Vacuums
Haramein, seemingly, is oft-cited or discussed as having attempted to bridge the gap between science and spirituality, or geometry and spirituality, wherein he supposedly equate the power of the vacuum to God, or something along these lines. (Ѻ)

Spin
Haramein's model explains that in the framework of German-born American physicist Albert Einstein’s spacetime geometric model of gravity, the measured velocity of the sun (240 km/s), moving in a direction toward the great attractor, acts to pull the planets along with it, sort of like water going down a drain, the drain shaped like a trampoline with a bowling ball sitting on it, whereby a modified type of Coriolis force and torque act to create a three-dimensional coil-like spin-forward trajectory of stellar system movement. Haramein argues that this model accounts for the ubiquitous nature of spin throughout the universe, from the subatomic to the supergalactic.

Humanities
In discussing how his theory applies to the human movement scale, although he doesn't seem to touch on subjects such as Austrian physicist Ernst Mach's circa 1885 turning tendencies or American chemical engineer Libb Thims' circa 2004 human molecular spin, he does touch on a mixture of loose thermodynamics, information, and energy exchange with a person’s boundary, speaking about things deteriorating towards entropy, but all-in-all the discussion seems to diverge into the metaphysical, to a large part, e.g. speaking about the hidden energies of the structure of the vacuum, auras, consciousness or awareness. [2]

Education
Haramein seems to be self taught with little formal education. He states that at age nine he began to develop a basis for a unified hyperdimensional theory of matter and energy.

In circa 1990, Haramein entered into a self-study period of physics in efforts to figure out the nature of spin. In 2003, he founded a new-age science non-profit group called The Resonance Project in Hawaii.

“Biology is the feedback mechanism for the universe to learn more about itself.”

“Looking for consciousness in the brain is like looking inside a radio for the announcer.”

References
1. (a) Haramein, Nassim and Rauscher, Elizabeth A. (2003). “A Consideration of Torsion and Coriolis Effects in Einstein’s Field Equations”, Bull. Am. Phys. Soc. S10016, Four Corners, AZ, Oct. 24.
(b) Haramein, Nassim and Rauscher, Elizabeth A. (2004). “The Origin of Spin: A Consideration of Torque and Coriolis Forces in Einstein’s Field Equation” (abstract), Journal; in: R. L. Amoroso, B. Lehnert & J-P Vigier (eds.), Beyond The Standard Model: Searching For Unity In Physics (Proceedings of the Paris Symposium Honoring the 83rd Birthdayof Jean-Pierre Vigier) (pgs. 153-168). The Noetic Press, 2005.
2. Haramein, Nassim. (2004). “The Geometry of Space”, Publisher.