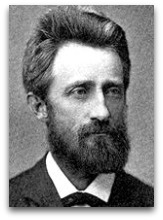 In hmolscience, Nathaniel Shaler (1841-1906) was an American paleontologist noted, in cessation thermodynamics, for his 1891 to 1900 lectures and publications on the subject of what seems to be an energy-based reinterpretation of the soul, people defined as an "organic individuality" derived from atoms via an aggregation process.

Overview
In 1891, Shaler gave his The Interpretation of Nature lecture series, turned book, a course of theological seminary student lectures, on the strained relations between natural science and religion, wherein he talked about how as a youth contact with the natural sciences “had the not uncommon effect” of leading him far away from Christianity, but that in recent years he insights into certain “truths of nature”, as he says, has led him back to some type of scientific reinterpretation of religion.

Shaler, here, discusses the differences between “inorganic and organic individualities”; and on the question of what constitutes a “living thing” mentions how Brownian motion, namely that “finely divided particles of many substances when suspended in a fluid will, under the influence of some forces as yet not well understood, take on an incessant movement”, and the properties of crystals of rocks, e.g. changes in constitution to make new materials, being similar to animals and plants, both obfuscate the old once-held definitions of what constitutes life:

“In truth, we can no longer maintain the existence of a clear physical difference between the organic and the inorganic world, and must regard these realms as divided from each other by features which when measured in a formal way are most unsubstantial.”

Later, in his section on materialism, energy, and the soul, states:

“A generation ago we conceived that matter was an inert something which was quickened into activity by energy, and that this energy was in its nature essentially different from the physical basis of the universe. The confidence of those who held to the opinions commonly termed materialistic was largely due to this belief in the dual organization of nature. Observing the ever-changing character of the natural forces and the endless transmutations which they undergo in action, and noting at the same time what seemed to them the inert character of substance except when stirred into motion or built into form, they naturally were led to deny the immortality of the soul, and to base their negations, as they supposed, on a firm material foundation. Of late years, however, the opinion has been gaining among physicists that matter itself is but a mode of action of energy, and so in place of the dualistic basis, naturalists are being driven to a conception of unity as regards the phenomenal world.

It is not difficult to see that in proportion as we come to the opinion that nature is but an exhibition of energy in various forms of presentation we are driven to a new conception as to the essential conditions of existence. It is obvious that we are less entitled than of old to make statements based upon the evanescent character of energy, or to suppose that we have compassed the range of its modes of action. The correction brings with it no affirmation, but it diminishes our trust in the ancient disbeliefs.”

In 1900, Shaler, in his The Individual: a Study of Life and Death, outlined, albeit in rather inconclusive discussions, views on the conservation of energy in the context of immortality; the following is an excerpt: [2]

“How is it that the naturalists are led to the false sense of certainty as to the value of their explorations in determining such questions as the immortality of the soul? The reasons for this state of mind, appear to be as follows: the conception that all the occurrences of the visible universe are related in the manner of antecedent and consequent or as cause and effect, that nothing lies without the enchainment of action, along with the conviction, eminently well founded, that energy involved in action is never lost, but only changes its form of activity.”

Students
American zoologist and biologist William Patten was a noted student of Shaler.

Education
In 1905, Shaler was a professor of geology at Harvard University.