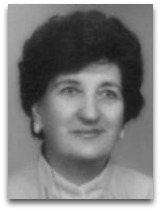 In existographies, Nedjeljka Petric (c.1941-) (CR:2) is a Croatian chemical engineering and chemical thermodynamics professor noted a number of 1990s articles in which she attempts to explain the “spiritual” aspects of humans, e.g. “god gives us the possibility to choose” negative or positive positions, using recourse to: quantum mechanics, thermodynamics, the Boltzmann-Planck entropy equation, the Heisenberg uncertainty relation, Onsager reciprocal relations, mathematical infinities and irrational numbers—a rare classic case of the overt “ontic opening” theorist, especially rare for a professor of chemical thermodynamics.

Overview
In 1991, Petric, in her “Application of the Thermodynamic Theory to Social Events”, opened to the following: [1]

“The thermodynamics of open systems may be applied to social events and social development. In this paper, the thermodynamic method is applied to the society as a system. The principle followed was: not man against nature, trying to overpower natural laws (‘arrange the nature’) and thus survive, but man in harmony with natural laws, man as a part of nature. The other principle used was: ‘what the storm takes, the calm will not return’ (a proverb), i.e. social events should take place as near to the equilibrium as possible approaching the reversible process as much as possible. When the second law of thermodynamics is applied to society i.e. social events, entropy is interpreted not as disorder but as freedom of individuals.”

Here, she argues that entropy, as defined by the Boltzmann equation, is interpreted not as disorder but as freedom of individuals (Frederick Rossini also argues along these lines); which is religious agenda code for using entropy as an ontic opening to argue that humans have free will can can therein "choose", without actually saying so.

In 1995, Petric published her “Thermodynamical and Quantum Theory applied to Spiritual (Psychic) ​​Condition of a Person”, where her aim is to attempt to build a bridge between science and religion, as she states, via thermodynamics, primarily, and quantum mechanics, secondarily. [2]

In 1997, she publisher her barely-readable Bible-backing article “Application of the Thermodynamic and Mathematical Theory to Man (Person) and Society”, wherein she attempts to argue, in short, that (a) just as we can never precisely know irrational numbers, e.g. π, which have an “infinite” number of decimal places, we cannot precisely know reversible processes, which are idealized to take place “infinitely” slowly, subsequently, we cannot know “infinite (God’s) wealth”, or something along these lines.

Then she goes on to argue that the Heisenberg uncertainty principle, applied to observations of our energy and our thoughts, means that in spiritual considerations, we cannot insist upon reproducibility of results, and that this has something to do with Jesus Christ. This particular article is a strain on the mind to read. In one of her conclusions, she seems to equate the striving of social systems towards equilibrium as the striving after God:

“The state of equilibrium is the ‘aim’ and everything in nature tries to reach it, strives unstoppably after the aim, strives after God.”

In 1998, she applied the Onsager reciprocal relations to the “spiritual condition” of a person. [2] This seems to be the last of her effort at an “attempt at a scientific approach to the religious”, as she stated in 1995.

Quotes | By
The following are quotes by Petric:

“My experiences with spirituality and my dealing with spirituality started with a question of my son Neborga: ‘What is entropy?’ He was then a student at the faculty of economics. My husband Bartul (Ѻ), PhD, professor, replied to that question completely spontaneously, in a heavenly manner, saying: ‘that is freedom, not disorder, when applied to society. And freedom is accepting and behaving according to god's (natural) laws, and in no other way’.”