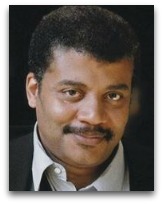 In science, Neil deGrasse Tyson (1958-) (CR:2) (FA:117) is an American astrophysicist, a Debate.org SMA candidate (Ѻ), known for his Carl Sagan like persona, an oft-perceived atheist, albeit self-aligned (2012) agnostic, who frequently has to correct his Wikipedia page to clarify this (Ѻ), known for being outspoken against intelligent design (Ѻ), how faith and reason are irreconcilable, how the Bible is bunk, etc., noted for his 2007 Death by Black Hole: and Other Cosmic Quandaries, wherein he elaborated on the humans = star dust ideology.

Religion
In 1999, Tyson, in his “Holy Wars” article, stated the following frank views: [2]

“At nearly every public lecture that I give on the universe, I try to reserve adequate time at the end for questions. The succession of subjects is predictable. First, the questions relate directly to the lecture. They next migrate to sexy astrophysical subjects such as black holes, quasars, and the big bang. If I have enough time left over to answer all questions, and if the talk is in America, the subject eventually reaches god. Typical questions include: Do scientists believe in god? Do you believe in god? Do your studies in astrophysics make you more or less religious?

This "if the talk is in America", is hilarious ... seemingly tracing to Thomas Jefferson's 1802 separation of church and state (see: atheism timeline) addition to the US constitution. Tyson continues:

“Publishers have come to learn that there is a lot of money in god, especially when the author is a scientist and when the book title includes a direct juxtaposition of scientific and religious themes. Successful books include Robert Jastrow's God and the Astronomers, Leon Lederman's The God Particle, Frank Tipler's The Physics of Immortality: Modern Cosmology, God, and the Resurrection of the Dead, and Paul Davies' two works God and the New Physics and The Mind of God. Each author is either an accomplished physicist or astronomer and, while the books are not strictly religious, they encourage the reader to bring God into conversations about astrophysics. Even Stephen Jay Gould, a Darwinian pitbull and devout agnostic, has joined the title parade with his recent work Rock of Ages: Science and Religion in the Fullness of Life.

The financial success of these published works indicates that you get bonus dollars from the American public if you are a scientist who openly talks about god. After the publication of The Physics of Immortality, which suggested the law of physics might allow you and your soul to exist long after you are gone from this world, Tipler's book-tour included many well-paid lectures to Protestant religious groups. This lucrative sub-industry has further blossomed in recent years due to efforts made by the wealthy founder of the Templeton investment fund, Sir John Templeton, to find harmony and reconciliation between science and religion. In addition to sponsoring workshops and conferences on the subject, Templeton seeks out widely published religion-friendly scientists to receive an annual award whose cash value exceeds that of the Nobel Prize.”

The following are noted statements on religion: (Ѻ)

“After the 9/11 attacks, when President Bush, in a speech aimed at distinguishing the US from the Muslim fundamentalists, said, ‘Our god is the god who named the stars.’ The problem is two-thirds of all the stars that have names, have Arabic names. I don’t think he knew this. This would confound the point that he was trying to make.”

“So you're made of detritus [from exploded stars]. Get over it. Or better yet ... celebrate it! After all ... what nobler thought can one cherish than that the universe lives within us all?”

“The remarkable feature of physical laws is that they apply everywhere, whether or not you choose to believe in them. After the laws of physics, everything else is opinion.”

“To be scientifically literate is to empower yourself to know when someone else is full of bullsh*t.”