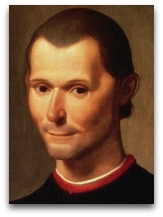 Machiavelli, according to Russian-born American sociologist Pitirim Sorokin, was the first advance the idea of the cyclic development of societies. [2]

Pareto
Italian engineer turned socioeconomist Vilfredo Pareto, supposedly, was inspired by Machiavelli’s distinction between two types of human instincts, one oriented toward tradition (lions) and one toward innovation (foxes), and that this, in part, is from where he gets is circulation of elites theory.

Quotes | On
The following are noted quotes and or tributes:

“We are much beholden to Machiavelli and others, that write what men do, and not what they ought to do. For it is not possible to join serpentine wisdom with the columbine innocency, except men know exactly all the conditions of the serpent; his baseness and going upon his belly, his volubility and lubricity, his envy and sting, and the rest; that is, all forms and natures of evil. For without this, virtue lieth open and unfenced. Nay, an honest man can do no good upon those that are wicked, to reclaim them, without the help of the knowledge of evil.”

“It must be considered that there is nothing more difficult to carry out nor more doubtful of success, nor more dangerous to handle, than to initiate a new order of things. For the reformer has enemies in all those who profit by the new order, and only lukewarm defenders in all those who would profit by the new order, this lukewarmness arising partly for fear of their adversaries, who have the laws in their favor; and partly from the incredulity of men, who do not truly believe in anything new until they have had actual experience of it.”

“The way men live is so far removed from the way they ought to live that anyone who abandons what is for what should be pursues his downfall.”

“Christian principles seem to me to have made men feeble, and caused them to become an easy prey to evil-minded men, who can control them more securely, seeing that he great body of men, for the sake of gaining paradise, are more disposed to endure injuries than to avenge them.”