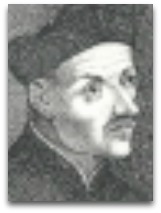 Overview
Cabeo is classified as a “Jesuit naturalist”, along with Athanasius Kircher and Gaspar Schott, who attempted to tackle the problem of occult or insensible causation in the seventeenth century. [2]

In 1629, Cabeo, in his Magnetic Philosophy, a book that attempted to refute the theories of William Gilbert (1600), from the Aristotelian view, made an important observation of electrical repulsion, reporting his observations that an electrically charged body can attract non-electrified objects, also that two charged objects repelled each other. [1]

Quotes | By
The following are quotes by Cabeo:

“If you seek to be able to know, from the school of the philosophers, why fire should induce heat, so that you do not seek refuge in an occult force or faculty, likewise, from this book you should be able to understand no less clearly why the magnet attracts iron, and why it turns itself to the pole, without another occult quality being thrust upon you.”

“It is plain from the above quotation, that Cabeus did not recognize repulsion as a true property of electrification. Nor was it so recognized by others until the publication by Otto von Guericke of his paper ‘De Virtutibus Mundanis’ in 1672. Von Guericke recognized what he regarded as a true repulsion of his electrified sulphur globe for light bodies in its vicinity, but his explanation of the phenomenon was rather metaphysical than physical.”