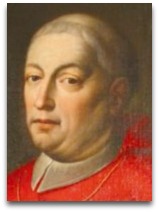 In existographies, Nicholas of Cusa (1401-1464) (IQ:180|#141) [RGM:248|1,500+] (CR:6), aka "Nicolaus Cusanus" or "Cardinal von Kues" (Guericke, 1663), was a German polymath—thing philosopher (see: thing philosophy), theologian, jurist, and astronomer—noted for his heliocentric belief, contrary to the then prevailing view, that the earth was not stationary but revolved, and that the sun was fixed as the center of the movement; his views would later influence those including: Leonardo da Vinci, Nicolaus Copernicus, Giordano Bruno, Johannes Kepler, Galileo, and Gottfried Leibniz.

Overview
Cusa proposed the earth was a sphere, spinning daily on its axis orbiting the sun—also, in opposition to Aristotle’s circular orbit theory, argued that perfect spherical orbits are impossible, thus predating the elliptical orbit theories of Johannes Kepler; that heavenly bodies were made of the same material as the earth; proposed dropping objects from towers to see why they fell as they did; described rules for experimentation; took the pulse; forecast the weather; argued for an infinite universe; invented reading glasses; wrote on squaring the circle, among other mathematical subjects; his best known work is his Learned Ignorance, according to which a person of learned ignorance is not a person of erudition (Ѻ); Nicolaus Copernicus, Galileo Galilei, Giordano Bruno, and Kepler were all, supposedly, aware of his writings, the latter citing him in the first paragraph of his first published work; commonly labeled as a polymath also many-sided genius.

Quotes | On
The following are quotes on Cusa:

“Nicholas of Cusa has understood and seen much, and is one of the most outstanding geniuses who ever breathed air. But regarding his apprehension of the truth, he was like a swimmer in the midst of a tempestuous river, tossed high and low; because he did not see the light continuously, and did not swim quietly or calmly, but intermittently, and by intervals. The reason for this is, he had not removed all of the false principles he’d imbibed from the common wisdom from which he’d parted; so perhaps, through force of industry, he came to correctly title his work On Learned Ignorance or The Ignorant Doctrine.”

“Cusa was the first modern thinker.”

“Cusanus owned more works by Lull than any other single author.”

“Each star makes its own individual world.”

— Nicholas of Cusa (c.1450), Learned Ignorance (2.12); cited by Otto Guericke (1663), in New Experiments on the Vacuum of Space (pg. 363), in support of his view and the view of Giordano Bruno, that fixed stars are moving suns with their own planetary systems

“There is present in all things a natural desire to exist in the best manner in which the condition of each thing's nature permits this. And [we see that all things] act toward this end and have instruments adapted thereto. They have an innate sense of judgment which serves the purpose of knowing. [They have this] in order that their desire not be in vain but be able to attain rest in that [respective] object which is desired by the propensity of each thing's own nature.”