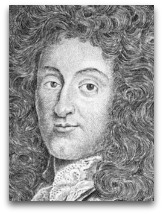 Organic | Inorganic
In 1675, Lemery, in his Course on Chemistry (Cours de chymi), supposedly (Thorpe, 1874), was the first to propose the division of chemistry into “organic chemistry” (animal/vegetable kingdom) and “inorganic chemistry” (mineral kingdom).

Acid-Base
Lemery is noted for his so-called "geometric atomism" (Farber, 1961), wherein to explain neutralization that takes place when an acid and a base react, he conceived, based on contemporary atomism and Descartes (c.1640), a geometrically-locking acid-base model of corpuscles, according to which the barb or spike of an acid corpuscle fit into the grove of a base or alkali, such as below. 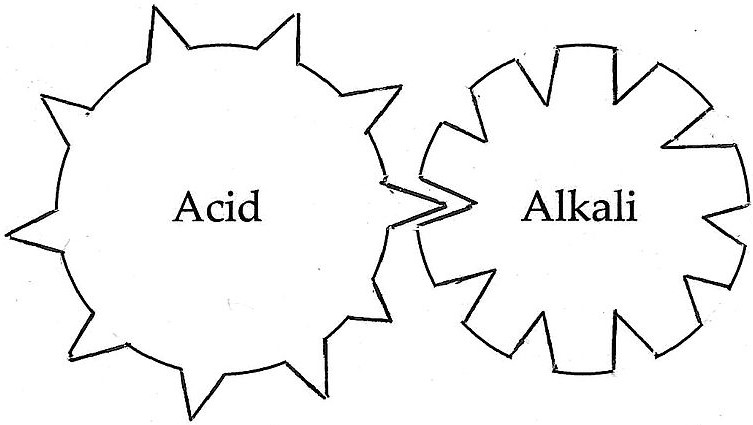 This has been called the doctrine of "figured particles", according to which the fitting of the two yielded a less abrasive product. [1]

Weight balancing
Lemery, in his lectures, discussed his preparations in terms of weights, usually in the manner of a cookbook, but frequently gives explanation of gains and losses in weights, but mostly as a "sop to the curious" done in an "offhand and almost flippant concern" (Farber, 1961). He is classified, in this regard, as a transitional figure in the theory of atomic balancing of chemical equations.

Family
Lemery was the father of matter of heat theory chemist and physician Louis Lemery.

Quotes | On
The following are quotes on Lemery:

“The metals sympathized with the planets and with the principle parts of the human body. An ‘alkahest, which no one had ever seen dissolved everything. The greatest absurdities were revered by the grace of a mysterious obscurity with which they were enveloped or entrenched against reason. One took pride in speaking only in a barbaric language resembling the sacred languages of the ancient theology of Egypt, understood by the priests alone, and apparently devoid of sense. Lemert was the first who dissipated the natural or artificial shadows of chemistry; who reduced it to more clear and simple ideas; who abolished the useless barbarism of its language; who only promised from it what was within its power, and that which he knew it could accomplish.”

“Chemistry occupies such an extensive sphere, its operations are so widely distributed, that it has been found desirable, for the greater convenience of study, to subdivide the matters upon which it treats. It was therefore agreed, as suggested by Lemery [c.1675], nearly two hundred years ago, to divide the subject into the two branches of ‘inorganic’ and ‘organic’ chemistry. Inorganic chemistry was formerly defined to be the chemistry of the mineral kingdom, in contradistinction to organic chemistry, which was held to be the chemistry of the animal and vegetable kingdom, since most of the subjects included under this division were of animal or vegetable origin.”

“Lemery explained chemical and physical properties by shape. Acids had sharp spikes on their atoms, accounting for the pricking sensation that exert on the skin. Alkalis were highly porous bodies into which the spikes of the acids penetrated and were broken or blunted in producing neutral salts.”

Quotes | By
The following are quotes by Lemery:

“Chemistry is the art which teaches the separation of different substances encountered in a mixture.”

“Sulphur sulfur is the only principle which makes fire.”