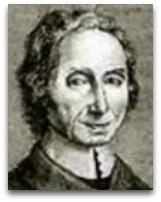 Overview
In 1664, Malebranche chanced to read René Descartes' Traité del l'Homme, which moved him so deeply that (it is said) he was repeatedly compelled by palpitations of the heart to lay aside his reading, and was from that hour consecrated to Cartesian philosophy.

Descartes and Malebranche were said to have inspired the development of physiocracy. [1]

In c. 1706, in commentary on Isaac Newton’s Opticks, Malebranche stated: “though Newton is no physicist, his book is very interesting”. [2]

Malebranche summarized the Cartesian soul model, which he seems to have adopted as his own, as follows: [3]

“Dogs, cats, and the other animals, have no intelligence, no soul in the sense in which thus concept is usually understood. They eat without pleasure, cry without pain, grow without knowing this. They have no desires and no knowledge.”

His end was said to have been hastened by a metaphysical argument into which he had been drawn in the course of an interview with George Berkeley.

Quotes | On
The following are quotes on Malebranche:

“Those who wish to form an idea of the shackles imposed by theology on the genius of philosophers born under the ‘Christian dispensation’, let them read the metaphysical romances of Leibniz, Descartes, Malebranche, Cudworth, etc., and coolly examine the ingenious but rhapsodically systems entitled: the pre-established harmony of occasional causes; physical pre-motion, etc.”

Quotes | By
The following are quotes by Malebranche:

“It is shameful that intelligent men and philosophers, who are obliged to search after and defend the truth for all kinds of reasons, talk without knowing what they say and are satisfied with what they do not understand.”