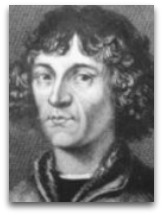 In existographies, Nicolaus Copernicus (1473-1543) (IQ:185|#56) (Cattell 1000:341) [RGM:14|1,500+] (Murray 4000:5|A) (Gottlieb 1000:18) [Kanowitz 50:15] (GPE:35) (GAE:1) [CR:136], or "Nicolao Copernico" (Latin), was a Polish mathematician, astronomer, and physician, aka the "next Ptolemy" (Erasmus Reinhold, 1542), noted for his 1514 forty-page booklet “Little Commentary” (Commentariolus), in which he began to lay out the basics of his heliocentric model of the universe, as opposed to the older geocentric model of the universe, eventually publishing the finalized version as the 1543 On the Revolution of the Heavenly Spheres, the “first book in nearly 1,400-years to rival Ptolemy’s Almagest” (Repcheck, 2007), which introduced the revolutionary idea to the world that the “earth moves” or that "the earth is moving and the stars are at rest" (Anon, 1542), a view opposed to that of the older 350BC physics model of Aristotle that the earth is the center of the universe and stationary. This famous publication is said to mark the start of the scientific revolution and later the various science-religion debates.

The following is the succession of astronomical genius:

In this mix, we note that Galileo, in discussion with Kepler, called Copernicus "the master" who dared to take the first step.

Rotation | Proof
Copernicus' assertion that the earth rotates, on its axis, was not proved until 1851 when Jean Foucault set up his famous pendulum (Ѻ), which showed that when the pendulum circled clockwise, it returned to its original spot after twenty-four hours.

Overview
In c.1514, Copernicus, in his Commentariolus (“Little Commentary”), a short, hand-written, anonymous, untitled, non-technical manuscript, listed seven assumptions or axioms; the main revolutionary three of which are as follows: [4]

“I have thought it well, for the sake of brevity, to omit from this sketch the mathematical demonstrations, reserving these for my larger work.”

This larger work, On the Revolution of the Heavenly Spheres, would not be competed for another two-plus decades.

“I reject as folly the [supposed] discovery of Copernicus, because in the Bible ‘Joshua bade the sun, not the earth, stand still’.”

“Copernicus is a fool [who] wants to turn the whole art of astronomy upside down!”

Likewise, Philipp Melanchthon (1497-1560), an the younger associate of Luther, described Copernicus’ heliocentric theory as an “old joke” (see: crackpot), implying that it was a superfluous revival of a frivolous circa 250BC suggestion by Aristarchus. Moreover, upon reading the Rheticus’ First Account (Narratio Prima), the first condensed summary of Copernicus’ theory, Melanchthon commented: [3]

“[Some think it] a distinguished achievement to construct such a crazy thing as that Prussian astronomer who moves the earth and fixes the sun. Verily, wise rulers should tame the unrestraint of men’s minds.”

IQ | Genius ranking
In genius studies, it is frequently reported that, in the early decade of the invention of the IQ scale (1916 to 1926), the IQ of Francis Galton was calculated to be twice that of Copernicus; this is summarized as follows:

“The American hereditarian Lewis Terman, the man most responsible for instituting IQ tests in America, retrospectively calculated Gallon's IQ at above 200, but accorded only 135 to Darwin and a mere 100-110 to Copernicus (see pp. 213-218 on this ludicrous incident in the history of mental testing). Darwin, who approached hereditarian arguments with strong suspicion, wrote after reading Hereditary Genius: ‘You have made a convert of an opponent in one sense, for I have always maintained that, excepting fools, men did not differ much in intellect, only in zeal and hard work’ (in Galton, 1909, p. 290). Galton responded: ‘The rejoinder that might be made to his remark about hard work, is that character, including the aptitude for work, is heritable like every other faculty’.”

Gould elaborates in this in more detail (see: Cox IQ); the current (Jun 2017) rankings for the three are as follows:

Moreover, it is difficult to envisage the future ranking Galton as a top 500 genius, at all.

On 24 May 1543, Copernicus ceased to move, for the last time; his last day is recounted by Tiedemann Giese to Georg Rheticus as follows:

“Copernicus death was caused by a hemorrhage and subsequent paralysis of the right side on 24 May, his memory and mental alertness having been lost many days before. He saw his treatise only at his last breath on his dying day.”

Quotes | On
The following are quotes on Copernicus:

“So large is the number of fools.”

— Galileo (1596), note to Kepler on his refrain from publishing on Copernicus

“Of all discoveries and opinions, none may have exerted a greater effect on the human spirit than the doctrine of Copernicus. The world had scarcely become known as round and complete in itself when it was asked to waive the tremendous privilege of being the center of the universe. Never, perhaps, was a greater demand made on mankind—for by this admission so many things vanished in mist and smoke! What became of Eden, our world of innocence, piety and poetry; the testimony of the senses; the conviction of a poetic-religious faith? No wonder his contemporaries did not wish to let all this go and offered every possible resistance to a doctrine which in its converts authorized and demanded a freedom of view and greatness of thought so far unknown, indeed not even dreamed of.”

“Copernicus’ book [1543] was not removed from the Index of Forbidden Books for more than two-hundred years [1835].”

Quotes | By
The following are quotes by Copernicus:

“When I attribute certain motions to the terrestrial globe, they will immediately shout to have me and my opinion hooted off the stage. Therefore, when I weighted these things in my mind, the scorn which I had to fear on account of the newness and absurdity of my opinion [that the earth moves] almost drove me to abandon a work already undertaken. In fact, I kept [the manuscript] hidden among my things.”

— Nicholas Copernicus (c.1540), a reference, supposedly, to the earlier work of al-Zarqali and al-Battani [5]