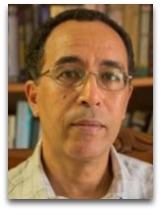 Religion | Science
Guessoum is an observant Muslim, who doesn’t believe in miracles, e.g. considering stories such as Muhammad’s night journey on the flying horse to be “spiritual experience”; believes in evolution, e.g. when queries about the story of Adam and Eve, i.e. the Quranic version of the clay creation myth, stated that he sees theses as metaphorical, allowing for “flexible” interpretation, in a way that evolution fits into the description and he objects to the anti-evolution tactics of people such as Turkish creationist Harum Yahya.

Golden age | Islamic scientists
The four big scientific figures in Islam’s golden age, according to Algerian-born astrophysicist Nidhal Guessoum (2010), are: al-Khwarizmi, inventor of algebra and coiner of “algorithm”, Alhazen (Ibn al-Haytham), Avicenna (Ibn Sina), and Abu al-Biruni, who exchanged many letters with the former; Averroes (Ibn Rushd) is also tagged in this group as a related universal scholar. [1]

“I don’t think science can answer questions about design and purpose.”

— Nidhal Guessoum (2010), “Response to question on design in the universe, creation of stars, and life, as an astrophysicist” [1]